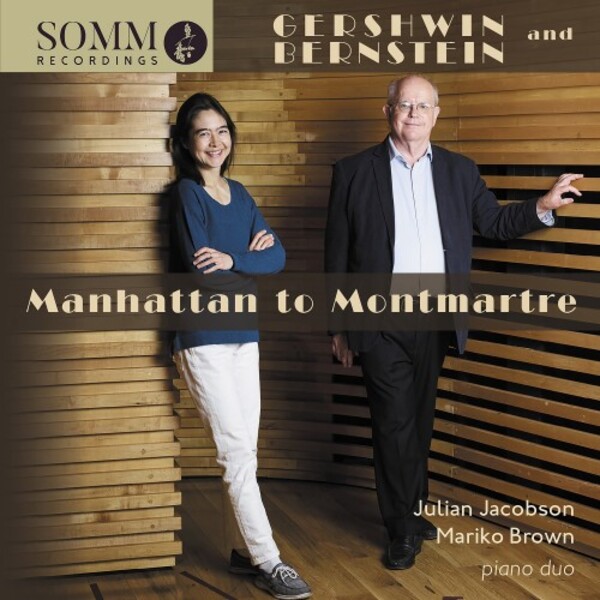 Manhattan to Montmartre: Gershwin and Bernstein for Piano Duet and Duo

Receiving first recordings are Jacobsons own joyfully virtuosic transcriptions for four hands/one piano of two Gershwin classics. Described by Gershwin as the most modern music Ive attempted, An American in Paris takes four sailors from the epicentre of New York to the heart of Paris during its celebrated Années folles. It marked a significant development in orchestral technique for the composer, a quality accented by Jacobsons exciting new arrangement.

Revelling in even greater sophistication, the Second Rhapsody was, claimed Gershwin, the best thing I have written. Distilling its crafted innovation, Jacobsons articulate new transcription makes a persuasive case for a curiously undervalued masterpiece. Transcribed by Henry Levine, Gershwins ever-popular Rhapsody in Blue brilliantly distils the euphoric paean to New York and what Robert Matthew-Walkers informative booklet notes describes as its seamless outpouring of melodic invention.

Matthew-Walkers notes also reveal how the influence of a shared Russian heritage led to a new vibrancy in American 20th-century music as epitomised by Gershwin and Bernstein, two hugely influential masters of form and colour. John Mustos acclaimed two-piano transcription of Bernsteins Symphonic Dances from West Side Story captures all the drama, poetry, romance and wit of this ground-breaking score while sacrificing none of its blazing ardour and energy.

Jacobson and Browns previous SOMM release was a wide-ranging recital including Busonis Fantasia contrappuntistica and music by Satie, Debussy, Casella, Poulenc and Anthony Herschel-Hill (SOMMCD0178). Hailed by Fanfare as a magnificent record an urgent necessity for any music-lover who takes their interest in the art seriously, MusicWeb International declared it impressive and revealing music for two pianos. Rewarding for the adventuresome listener.