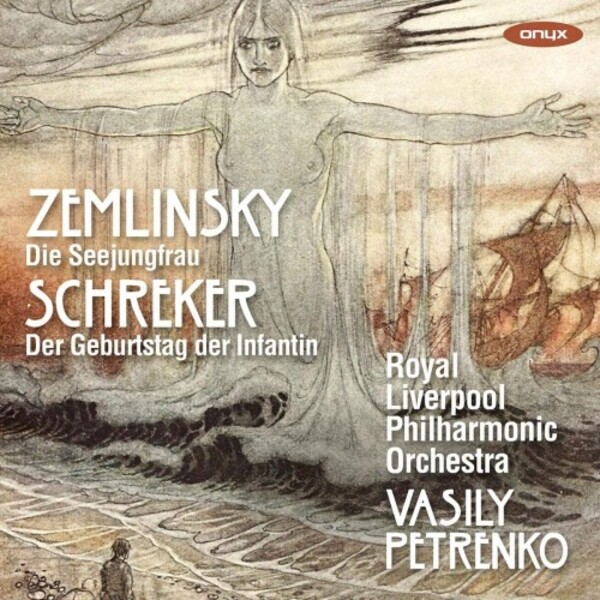 Der Geburtstag der Infantin (The Birthday of the Infanta)

Der Geburtstag der Infantin (The Birthday of the Infanta)

Following on from their critically acclaimed albums of Stravinsky, Elgar and Tchaikovsky, the award-winning team of Vasily Petrenko and the RLPO turn to Zemlinsky and Schreker.

Premiered in the same concert as his brother-in-law Schoenbergs Pelleas und Melisande in 1905, Zemlinskys Die Seejungfrau (after Hans Christian Andersen) was almost ignored by the reviewers.

Considered too conservative for the progressives and too progressive for the conservatives, Zemlinsky struggled to overcome the negative reviews of this masterpiece and withdrew it in the immediate aftermath of the premiere.

Vasily Petrenko for this recording uses the original version of the score which restores the bei der Meerhexe episode to the second movement.

Schrekers Dance Pantomime Der Geburtstag der Infantin (story by Oscar Wilde) was given its premiere in 1908 and was his first big success. One of the most progressive of the Viennese composers of this period, Schrekers star would sadly wane, aided by the rise of anti-Semitism and the Nazis. Stripped of his official posts, he died in 1934 of a stroke.

The Royal Liverpool Philharmonic Orchestra, under their outgoing chief conductor Vasily Petrenko (soon to take up the reins at Londons Royal Philharmonic Orchestra), make a splash with their latest release on the Onyx label. It pairs two marvellous orchestral works by two composers from the turn of the last century, both of whose reputations were all but forgotten thanks to the horrors of the 1930s and 40s. Alexander Zemlinsky (1871-1942) and Franz Schreker (1878-1934) were in their day two of the most celebrated Viennese composers at a time when the opulence of Richard Strausss music held sway, and both wrote music that combined Straussian orchestral brilliance with the rigorous motivic principles of Brahms. After decades of neglect, recent years have seen a renewed interest in both their outputs, but its still a welcome treat to hear their music in new recordings, especially when  as here  the coupling is so imaginative.

Zemlinsky was still fresh from his rejection by the dazzling beauty Alma Schindler (soon to marry Mahler) when he set upon another story of tragic love in the shape of Hans Christian Andersens popular fairy tale The Little Mermaid. Working in parallel with his younger colleague and sometime pupil Arnold Schoenberg (who composed his Pelleas und Melisande at the same time), he initially conceived Die Seejungfrau (The Mermaid) as a study for a planned Symphony of Death, its two movements, each in two parts, sticking fairly closely to Andersens narrative. The Mermaid longs for human love and, when rejected, plans to kill the object of her desires, but instead redeems herself through renunciation, thereby winning the eternal life she secretly seeks. Zemlinsky was also inspired by Strausss epic tone-poem Ein Heldenleben, which both fascinated and (in its shameless egotism and use of dissonance) appalled him, and Die Seejungfrau in its eventual three-movement form, though less closely tied to Andersens narrative than first planned, is an ambitiously conceived and realised work of some 45 minutes duration, scored for impressively large orchestra. Premiered in 1905 at the same concert as Schoenbergs Pelleas und Melisande, it was initially the more successful of the two works (and certainly the better performed: Zemlinsky, already experienced and talented on the podium, conducted it himself), but was shelved after just a few more performances, its first movement manuscript given as present to Marie Pappenheim, librettist for Schoenbergs 1909 masterpiece Erwartung.

Only in the 1980s was it realised that two orchestral movements among Zemlinskys papers in the United States, thought to be part of an incomplete symphony, belonged together with the first movement in Vienna, and Die Seejungfrau received its modern premiere in 1984, since when it has become one of its composers most popular works. Petrenko and the RLPO play the most recent version of the score, as edited by Zemlinsky scholar Antony Beaumont, which restores to the second movement, with its heady evocation of a ball in the Mer-kings palace, a deliciously spooky episode depicting a visit to the Mer-witch. It is, however, the sumptuously scored first movement, with its matchless conjuring of the Mermaids world and its gorgeously-written love music, that casts its spell over the work as a whole. The Liverpool players sound as if they were born to play this music, with rich brass tones, characterful, clearly-defined woodwind, radiant strings and tingling percussion, and Petrenko conducts a rapt, urgently compelling performance that nevertheless manages to project the works darker subtext. Set alongside contemporaneous works by Mahler, Strauss, and even Schoenbergs hyper-Romantic Gurrelieder, Die Seejungfrau need fear no comparison, and Zemlinskys inventiveness (sometimes dismissed by critical voices), sounds as fresh-minted here as one could want.

The coupling is inspired: Schrekers one-act dance-pantomime on Oscar Wildes fairy tale The Birthday of the Infanta. Composed in 1908 to a commission from the sisters Grete and Wiesenthal, a good ten years before Zemlinskys celebrated opera Der Zwerg on the same story, it is performed here not as the more familiar published suite form, but in its complete original version, which lasts several minutes longer. Comprising a series of wonderfully focussed vignettes, Der Geburtstag der Infantin combines fairy-tale charm, rich inventiveness and scoring, and unforgettable evocations of the Dwarfs awkwardness and ultimately tragic self-awareness. The Infanta and her entourage are delightfully carefree, while theres exquisite beauty in the dance of the Marionettes. The Dwarfs own three dances are a perfectly-judged mixture of the grotesque and the enchantingly elegant, with moments of Tchaikovskian magic. All the more powerful, then, is the dawning tragedy of the final two numbers: the Dwarf glimpsing himself for the first time in the mirror, his heartbroken death, and a double-twist of an ending that, in its cruel economy and brevity, is quite brilliantly composed and realised here. As another fairy tale with dark undertones, written in the same hothouse atmosphere that was Vienna in the first decade of the 20th century, this relative rarity makes an ideal coupling for Die Seejungfrau, and it receives a similarly winning and committed performance from Petrenko and his musicians.

A disc of this quality serves as eloquent tribute to Petrenkos achievements in Liverpool since he took up his post in 2004, and both performances are caught to perfection by the Onyx team under producer Andrew Cornall. The accompanying booklet is on the slender side, though Daniel Jaffés brief notes are helpfully to-the-point, while an Arthur Rackham illustration (The Shipwrecked Man and the Sea) makes for a memorable if somewhat unsettling cover. Its the performances, however, that should grab your attention: luxuriant, ripe but finely detailed, doing ample justice to two works that deserve to be far better known.