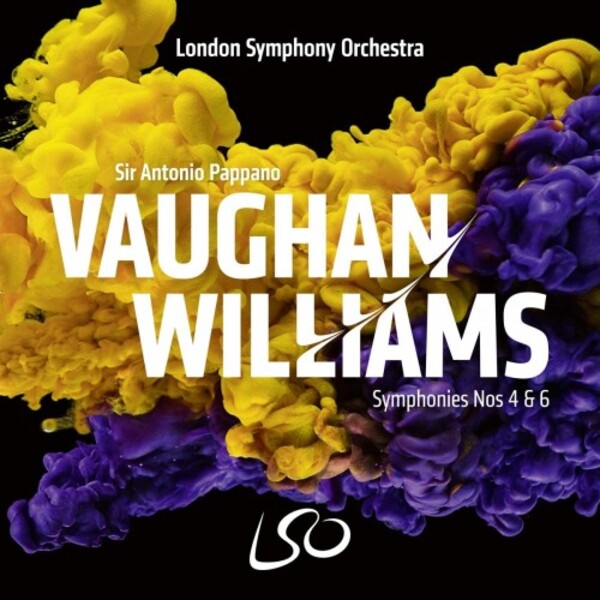 Sir Antonio Pappano leads the London Symphony Orchestra in a pair of symphonies by Ralph Vaughan Williams that span the build-up and aftermath of the Second World War.

Throughout the Fourth Symphony Vaughan Williams channels tension and power through the music in amongst moments of light and clarity. It evokes a sense of hardship and persistence, perhaps suggesting the ever-present threat of war in the 1930s.

Written in 1947, the composers Sixth Symphony also seems to reflect the hardships and devastation wrought by World War II. Melancholic in some movements, ferocious in others.

Wartime fury and sorrow punctuate magnetic performances  The Times (on Symphony no.6)

Pappano tore into it with incisive ferocity, emphasising its violence, mordant humour and almost deliberate crudity, though the radiant closing section of the first movement shone like a brief beacon of hope, and the ambiguous finale hovered between exhaustion and acceptance.   The Guardian (Symphony no.6)

Most impressive of all was Pappanos well-prepared, glamorous interpretation of Vaughan Williams furious Symphony no. 4 in F minor... the levels of intensity achieved by its final bars made it seem almost like a British Rite of Spring.  Bachtrack

The timing could hardly be better: this new recording of Vaughan Williamss Fourth and Sixth Symphonies by the London Symphony Orchestra under Antonio Pappano comes just as the conductor has been announced as the orchestras next Chief Conductor (from 2023) in succession to Simon Rattle. And, if this disc is anything to judge by, the LSO have made an exceptionally shrewd and inspired choice. Until now, Pappanos activities have been largely in the opera house, at Covent Gardens Royal Opera and before that at Norwegian National Opera and La Monnaie in Brussels. Yet he is hardly a stranger to the concert platform, and the orchestral recordings he has already made, with his Santa Cecilia Orchestra in Rome, but also with the LSO, the Berlin Philharmonic and the Philharmonia, have been impressively classy, whether accompanying such soloists as Leif Ove Andsnes, Beatrice Rana and Janine Jansen, or in symphonic repertoire from Schumann, Saint-Saëns and Tchaikovsky to Rachmaninov, Elgar, Bernstein and Maxwell Davies.

In the opera house, Pappanos range has been even wider, from Mozart, Verdi and Puccini to Birtwistle and Turnage. There are good reasons why the tried-and-tested route of sustained operatic work has produced so many great conductors over the years. One is knowing the importance of timing (not just rhythmic acuity but the overall pacing of a work), and another is the capacity to work as part of a creative team. These qualities are evident throughout this new disc, where Pappanos ability to allow space for the orchestral tone (with the LSO on top form) is coupled with a keen feeling for the symphonies uncompromising expressive urgency.

Both performances, recorded at live concerts in the Barbican Hall, took place on significant dates: the Fourth on the day of the 2019 UK general election, the Sixth on the very eve of the closure of concert venues and theatres as the Coronavirus hit Britain in March 2020. This lends both symphonies an extra frisson that feels entirely appropriate to the musics often grim, implacable demeanour.

The sheer boldness of the dissonance-laden Fourth Symphony, which so shocked the audience at its 1935 premiere, is evident right from the start, underscored by the relative dryness of the Barbican acoustic. The LSO produces a terrifying wall of sound, incisive but with fine dynamic refinement and rhythmic alertness. As the first movement progresses, it is also Pappanos knack of sustaining the tension and tone that impresses, as well as the refinement of balance, so that the few moments of quiet are all the more affecting. That gift for sostenuto playing is again obvious in the Andante moderato second movement, whether in the portentous opening wind cries or in the hushed string elegy that follows. Theres a sense of bleak inevitability to Pappanos relatively spacious tempo here, which throws into stark relief the demonic Scherzo that follows, rhythmically buoyant and insistent, the recurring motto theme as taut as its tightly-spaced intervals. Every section of the orchestra  strings, woodwind, brass and percussion  is on its mettle here, while the transition to the explosive Finale is thrillingly done. Vaughan Williams was especially conscious of the problem of the superfluous finale, but in Pappanos hand this movement feels like the necessary culmination of all that has gone before, an expressive safety valve whose moments of uneasy stillness are extraordinarily potent. The fugal epilogue, led by blazing brass, crowns a performance of epic dimensions and impact.

Just as impressive is the account of the Sixth Symphony, a work in no need of the post-war apocalyptic tags that have been attached to it by some commentators, yet which undeniably assumes extra force from the remarkable circumstances of its performance. Once again, theres enormous urgency and bite to the playing, with the underlying pace unyielding yet capable of allowing through glints of sardonic humour. The overlaying of oompah figuration with espressivo countermelody is particularly effective here, while the harp-led coda before the main themes return is gorgeously played.

The Moderato second movement, with its darkly insistent ra-ta-tat rhythms and ominously quiet yet anxious central section, builds to an overwhelming climax before the plangent coda (with the beautifully-controlled tone of Christine Pendrills cor anglais). What a contrast then follows with the restless, bitingly sardonic humour of the Scherzo, with mocking xylophone, and jazzy inflections from Bradley Grants tenor sax. The diabolical central section has rarely sounded so spectral as here, and the whole movement takes on the feeling of a macabre perpetuum mobile.

It is in the hushed fourth-movement Epilogue, however, that this performance is at its most haunting: only an orchestra and conductor of this quality and pedigree can sustain eleven-minutes of pianissimo playing so effectively. In a Symphony so remarkable for its extremes of expression, this movement above all, with its sepulchral, whispered string tones, mournful woodwind, quietly glowing brass, and telling string and wind solos, hits home because of its very starkness: in mid-March 2020 it must have felt especially devastating. As it dies away to nothing, the quote from Shakespeares The Tempest referenced by the composer  We are such stuff as dreams are made on, and our little life is rounded with a sleep  seems even more relevant than usual.

Even given the abundance of exceptional Vaughan Williams symphony recordings currently available, this one really does seem rather special, both for its aptness to our times and for the promise it holds out of the LSO-Pappano relationship. Exceptionally well captured by producer Andrew Cornall and his team, and with excellent notes from Andrew Huth and Wendy Thompson, it is certainly one of the great RVW discs of recent years.

The Fourth (1935), in F minor, singular in its ferocity, opens with fortissimo dissonance, strings clawing upwards over grinding brass and ominous kettle drums. In its restless energy, and in the shading of its reflective interludes, this performance is alive with risk, the sound clean and detailed.  Fiona Maddocks
The Observer 25 April 2021