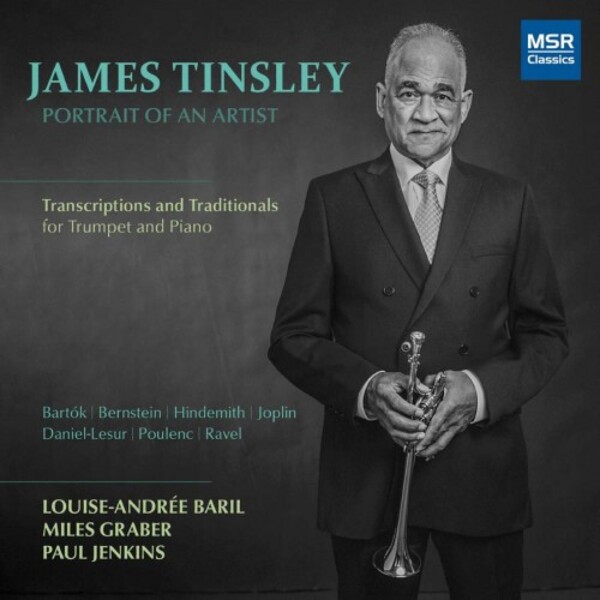 James Tinsley: Portrait of an Artist (Transcriptions and Traditionals for Trumpet and Piano)

» no.1 in C major
Suite francaise

» no.1 in C major
Suite francaise

James Tinsley made his solo debut with the Philadelphia Orchestra as a winner of the Philadelphia Concerto Competition. Since that time, he has appeared as soloist with orchestras ranging from the Philadelphia Orchestra and Atlanta Chamber Orchestra to the Boston Pops and the Estonian State Symphony Orchestra. He has held principal trumpet positions with the Portland Symphony Orchestra, Handel and Haydn Society of Boston, Caracas Symphony Orchestra of Venezuela and Toronto Pops. As a freelance musician, he performed regularly with the Boston Symphony Orchestra, Opera Company of Boston and Boston Pops. Also a music educator, James Tinsley has served on the faculties of Dartmouth College and the Royal Conservatory of Music in Toronto, Canada. He has been a visiting professor at Williams College in Massachusetts, and has given master classes at Rutgers University, Northwestern University, Boston Universitys Tanglewood Institute and Tallin Conservatory in Estonia.
An aficionado of recorded music, James has also been active as a producer of chamber music recordings, curating numerous solo CDs for Charles Schlueter, former principal trumpet of the Boston Symphony Orchestra, as well as for his own group, The Niagara Brass. Tinsley has been an active chamber musician, performing with ensembles in Boston, Montréal, Toronto and San Francisco, as well as abroad. He founded the New Brass Ensemble, a quintet of African American musicians variously based in Alabama, Tennessee, California and Montréal. Subsequently, he has led the Niagara Brass Ensemble in Toronto, which recently issued their first CD, featuring the music of J.S. Bach. As a jazz musician, Tinsley was a member of Chick Coreas Return to Forever, and later of the Stanley Clarke Band. In recent years, he has focused increasingly on solo recitals with piano and organ. Tinsley pursued trumpet studies at the Philadelphia School of Music, Curtis Institute, New England Conservatory and at the distinguished summer institutes at Tanglewood and Marlboro.
Louise-Andrée Baril was a winner of both the Concours des matinées de Montréal and the Canadian Music Competition. Baril also performed a recital at Carnegie Hall after winning first prize at the Young Pianists Competition in New York City. She is a rehearsal pianist for the Opéra de Montréal and at Université de Montréal, where she leads the opera workshop and gives instruction in accompaniment. Baril has performed on more than 20 recordings, and is the musical director of the Orford Summer Festival opera workshop. She received her masters degree in piano from the Université de Montréal, and has studied with Maria Curçio in London and attended workshops given by Menahem Pressler of the Beaux Arts Trio.

Miles Graber received his musical training at The Juilliard School, and has performed with numerous prestigious artists, including Itzhak Perlman, Sarah Chang and Cho-Liang Lin Graber has been a member of the chamber groups Trio Concertina, MusicAeterna and the Sor Ensemble, and has been associated with the San Francisco Chamber Soloists, Midsummer Mozart, Berkeley Opera and Opera San Jose. He has been on the faculty of the Crowden School, and serves as Virtuoso Program Piano Accompanist at the San Domenico Music Conservatory.

Paul Jenkins performs as a tenor and keyboardist in the Early Music genre, as an instrumental accompanist and as a chamber musician. Before he began music studies at the University of Toronto, Jenkins already had considerable experience performing in church choirs and listening to influential scholar-performers, such as Colin Tilney, with whom he studied. His mentors have included Christopher Hogwood and Stephen Cleobury. He has a lifelong interest in learning the art of improvising within different compositional styles. In addition to being a member of the Toronto Consort, Jenkins has performed with orchestras and opera companies throughout the province of Ontario, as well as appearing with notable Early Music groups.