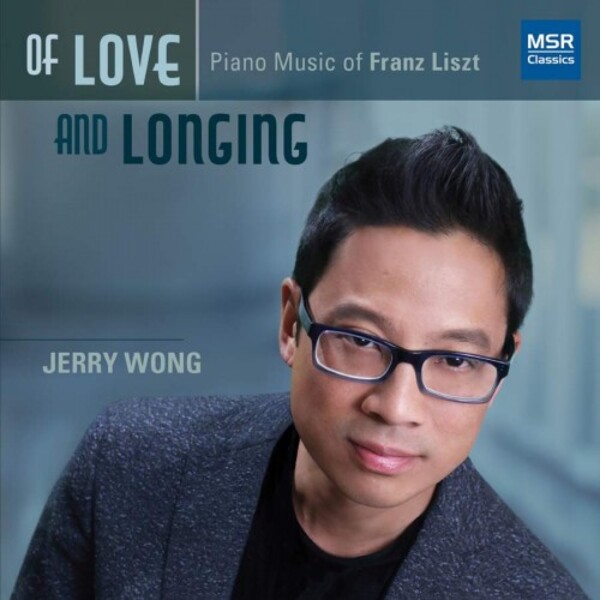 We will fly far from the world; we will live, love and die for each other alone.

In 1833, the unparalleled pianist and budding composer Franz Liszt wrote these powerfully sweeping words to his new mistress Marie dAgoult. Among the many struggles facing their impassioned love affair was Maries desire to influence Liszts compositional life in favor of his ambitions to be the single greatest conqueror of the concert stage. Blatantly virtuosic elements appeared and reappeared at different times during the complex trajectory of Liszts creative life. As his career developed, several bodies of output stood apart from those which were consumed with exemplifying dazzling showmanship, including notably the volumes of pieces found in Années de pèlerinage, Harmonies poétiques et religieuses and the short works from his late period.

The majority of the works included on this disc derive from these bodies of literature. They grapple with themes of desire, longing, loss and solitude, while others have a foreboding sense of gloom and ultimate demise. Chapelle de Guillaume Tell, Au lac de Wallenstadt and Les cloches de Genève from the Swiss book of Années de pèlerinage (Years of Pilgrimage), are all wonderfully evocative works that offer a stunning array of harmonic color. It is no coincidence that each is reflective in tone and imbued with a sense of nostalgia. The inspiration came from the sights and scenes Franz Liszt and Marie dAgoult encountered as they fled Paris together for a time of seclusion and intimacy in Geneva. Vallée dObermann, published in the same set, has as its origin in the novel by Étienne Pivert de Senancour. The piece unfolds like a tone poem with a mood of brooding and questioning. Essentially monothematic, Liszt manages to reinvent and transform the opening descending scale theme with the most spectacular sense of imagination. Harmony, texture and register are used to recast the gravity of the initial theme in shades of delicacy, drama and warmth. The work ultimately culminates in unbridled emotional ecstasy.

Nuages gris, La lugubre gondola and Unstern! Sinistre, Disastro were all written in Liszts later period. As his religious devotion grew, he increasingly sought seclusion, absolving himself of the worldly pleasures of his younger life in search of pursuits of deeper meaning. Liszt began to compose music of sparser textures, experimenting with a harmony so unique and dissonant that some have likened it to early atonality. Each of these works expresses a dark undertone, whether it be represented by nature, a premonition of death or a lurking sense of the diabolic. Lohengrins Admonition holds some of this same atmosphere as well, but it is in Funérailles (perhaps the best known work from the ten pieces of Liszts Harmonies poétiques et religieuses) that the concept of death is probed most intently, portraying the clangorous unrest it proclaims upon those who are left to grieve, as well as the intense mourning which follows.

While romantic love might be one of the underpinning themes tying much of the disc together, it is Liszts transcription of Wagners Liebestod as well as Sposalizio (marriage) that most clearly illuminate this concept. Sposalizio is the only work presented from the Second Book of Years of Pilgrimage and can be noted for its prolonged climax accompanied by a surging left-hand octave line. The narrative of Liebestod (the title of the third act of Wagners opera Tristan und Isolde) is the quintessential tragic love story. This piece is easily the centrepiece of the disc, unifying all of the various themes presented. A new harmonic world is explored, foreshadowing Liszts later works. The celebrated and much studied Tristan Chord begins, followed by an unending chromaticism which teases the line from one moment to the next, as the music teeters on the edge of the ultimate collapse of traditional tonal concepts. Hyper-romanticism and a desperate yearning for companionship are followed by inevitable finality of death and parting.

The relationship between Franz Liszt and Marie dAgoult ultimately came to its conclusion as the two powerful personalities met with unavoidable clashes. One ongoing stress between them was dAgoults wish for Liszt to move away from the glitter of concertizing and focus on the loftier ambition of a compositional life. Though often still remembered for spectacular pianistic effects, it is also apparent that dAgoults desired objective actually came to fruition. The long arc of Liszts influence as a composer is still being felt today as audiences, pianists and scholars continually discover new meaning in the works of this major figure from nineteenth-century music.
 Jerry Wong, September 2020
Pianist Jerry Wong has performed throughout the United States, Europe and Asia in prestigious settings, including Weill Recital Hall in New York City, the National Gallery of Art in Washington D.C., Severance Hall in Cleveland, Shriver Hall in Baltimore, PianoForte in Chicago, the Kravis Center in West Palm Beach and in the National Concert Hall of Taipei and Opera City Hall in Tokyo. Frequently sought after as adjudicator, clinician and lecturer, he has presented master classes at noted institutions, including the Cleveland Institute of Music, Indiana University, Northwestern University and University of Michigan. Internationally, he has given classes at conservatories and universities in Australia, China, Hong Kong, Italy, Korea, Macau, Malaysia, Russia, Singapore and Taiwan. He has presented lecture recitals for Music Teachers National Association, the National Conference on Keyboard Pedagogy, Music Teachers Association of California and the World Piano Teachers Association. Also active as an author, his work includes liner notes for Music Minus One, reviews of several compact discs for MSNBC, a chapter in The Pianists Craft 2 and articles in The Piano Magazine. Wongs performances, recordings and interviews have been widely broadcast on radio and television. A graduate of Indiana University, Peabody Conservatory and Manhattan School of Music, where he completed the Doctor of Musical Arts degree, Wongs teachers have included Menahem Pressler, Ann Schein and Byron Janis. He was Professor of Piano at Kent State University in Ohio for 16 years prior to becoming Associate Professor and Co-Head of Keyboard at the Melbourne Conservatorium of Music in Australia. Jerry Wong is a Steinway Artist.