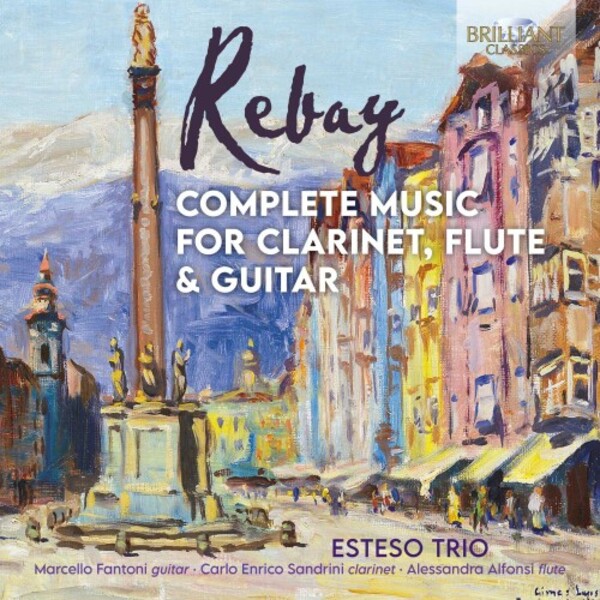 The dates are deceptive: the Viennese composer Ferdinand Rebay (1880-1953) remained largely unaffected by the turbulent musical currents swirling around him in the Austrian capital during the early 20th century. Instead, he composed highly appealing music, Romantic in harmony and Classical in form, with a particular focus on the guitar. Brilliant Classics have brought his name back to light in recent years with modern recordings of the duets for clarinet and guitar (94171), the quartets for guitar, flute and strings (9250) and the sonatas for flute and guitar (9291).

In a similar vein, the Italian Esteso Trio now presents three variation sets scored for clarinet, flute and guitar. The first of them is based on an Austrian folksong and conceived as a series of homages to Rebays Viennese forebears: Haydn, Mozart, Beethoven, Schubert and Johann Strauss. The second takes a Tirolean folksong for inspiration and Rebay supplied his own theme for the third, again popular in character and ending with an ebullient Scherzo.

In between these highly attractive variation sets, the Esteso Trio plays a Trio and a Spanish Rhapsody, both likewise dedicated to Rebays niece, the concert guitarist Gerta Hammerschmied, who apparently inspired the composers passion for the instrument: Meiner lieben Gerta! Ostern 1941 reads the title page of the Trio.
Rebay worked as a piano professor at the conservatoire and composed prolifically in his spare time  more than 600 works bear his name  in a spirit of relaxed craftsmanship that makes an hour spent in his company full of uncomplicated pleasure.
Rebay was no dilettante  as tuneful as his music always is, it is unfailingly imaginative  MusicWeb International
Esteso Trio:
- Marcello Fantoni (guitar)
- Carlo Enrico Sandrini (clarinet)
- Alessandra Alfonsi (flute)