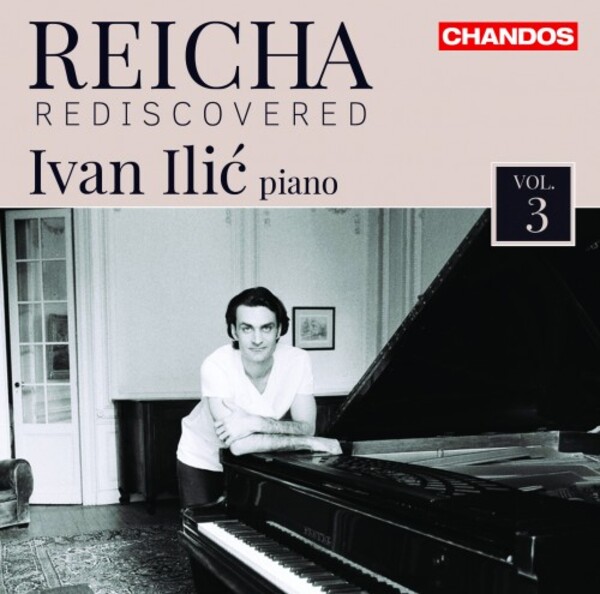 For this his third volume of works by Antoine Reicha, the pianist Ivan Ilić turns to one of the composers most extraordinary works, LArt de varier, op.57. The Art of Variation consists of fifty-seven variations on a theme (that the number of variations match the opus number is not a coincidence) and was composed in 180203, at the beginning of the six-year period which Reicha spent in Vienna, where he studied with Haydn and re-kindled his previous friendship with Beethoven. The set is remarkable for its scale and invention. Ivan Ilić describes the work as the missing link between Bachs Goldberg Variations and Beethovens Diabelli Variations, which was certainly influenced by Reichas work.

The recording was made at Potton Hall in Suffolk, on a Steinway Model D grand piano.

A close friend and contemporary of Beethoven, Anton Reicha (1770-1836) is a fascinating figure in classical music of the early nineteenth century, whose music  with the exception of his popular wind quintets  is still far too little known to audiences. Born in Prague, he moved via Bavaria and Swabia to Bonn, where Beethoven was a fellow student, and they were colleagues in the court orchestra. From Bonn (under attack from Napoleonic forces), Reicha went first to Hamburg and then Paris, before moving in autumn 1802 to Vienna. There he renewed his acquaintances with both Haydn and Beethoven, subsequently describing his friendship with the latter as like Orestes and Pylades. In 1808 he settled permanently in Paris, where, having already struggled to make his mark as a composer in German-speaking markets, he increasingly devoted himself to music theory. As professor of theory and composition at the Paris Conservatoire, he counted Berlioz, Gounod and Liszt among his pupils. In later years, César Franck was a private pupil.
From fairly conservative Classical beginnings, Reichas own music took on an increasingly theoretical aspect, with particular interests in counterpoint and fugue. Although composed during his early Viennese years, Reichas LArt de varier (The Art of Variation), op.57, has a decidedly didactic aspect. It is comprised of a carefully-constructed theme and no fewer than 57 variations which offer a kaleidoscope of pianistic and compositional techniques, ranging from the technically easy and musically straightforward, via the more difficult and exploratory, to the positively virtuosic  not in any progressive order, however, but seemingly to maximise the sense of extreme diversity. Written at the same time as Beethovens more modestly-scaled (but still ground-breaking) opp. 34 and 35 variations, there is evidence of some cross-fertilisation of ideas. Still more interesting, however, is the anticipation of Beethovens much later Diabelli Variations, not to mention the pianistic sound-worlds of Chopin, Schumann, Alkan and Liszt. Notwithstanding the relative lack of an overarching sweep in the visionary manner of Beethoven, this is still music way ahead of its time, straddling the worlds of Baroque fugue and dance, Classical salon, Romantic character-piece and virtuoso étude.
As a guide to the hidden depths and delights of LArt de varier, one could scarcely ask for a better guide than the Serbian-American pianist Ivan Ilić, himself based in Paris and with a background (like Reicha) in mathematics as well as music. This is volume three of his series Reicha Rediscovered on the Chandos label, which (together with an entirely unrelated but complementary series of recordings on Toccata) is steadily revealing to listeners the world of Reichas lesser-known works. Ilićs earlier releases have focussed on more étude-based pieces; by devoting volume three to a single 87-minute (!) work in all its glory, Ilić pays the greatest tribute yet to Reichas fertile, cerebral but also hugely engaging creative gifts. And he rises magnificently to the pianistic challenges of the more technically demanding variations, with their cascading runs, parallel fingering and hand-crossing, while imbuing even the apparently simplest movement with a tenderness and inwardness that is powerfully affecting. The range of touch, tone and dynamics he displays throughout the disc are reason enough to put it top of the wish-list for pianophiles.
Performed on a Steinway Model D in Potton Hall, Suffolk, the sound as captured by producer/engineer Jonathan Cooper does ample justice to both Ilićs fabulously dexterous playing and Reichas boldly ambitious scope and inventiveness. Whether you sit down to experience this extraordinary work in one sitting or take it in stages, this is a real ear-opener of a disc, a true revelation of music that deserves to be known by a far wider audience than simply musicologists and other specialists. Bravi to all concerned!