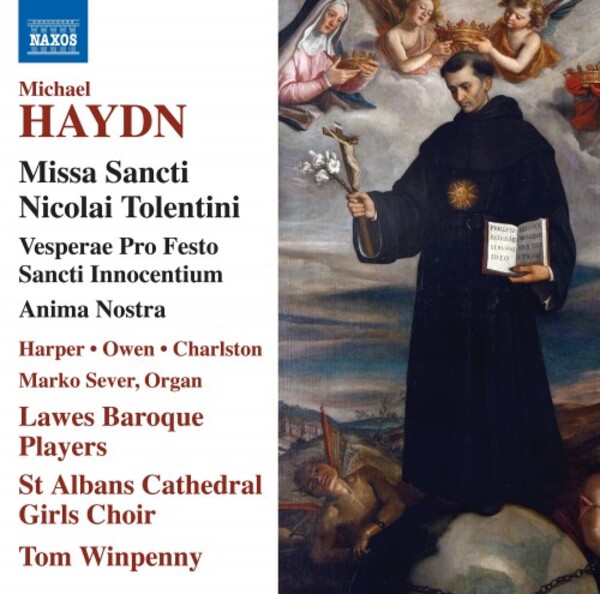 Michael Haydns colourful and inventive music is uplifting and expressive in equal measure, but his music has been eclipsed by that of his elder brother Joseph, and by Mozart. Sacred music is central to Michael Haydns oeuvre and was considered by some contemporary critics as superior to Josephs. Encompassing a broad range of textures and styles, parts of the Missa Sancti Nicolai Tolentini demonstrate Haydns music at its most exhilarating and energetic, and his supreme gift for empfindsames (sensitive) lyrical writing is also to be heard in the Vespers.

Michael Haydns music has long existed in the shadow of his brother Joseph, and recordings of his luminously joyful sacred music are in short supply. This release therefore enters the market virtually unchallenged by alternative recordings, and will be highly attractive to collectors looking to explore beyond familiar works by Joseph Haydn and Mozart.

The St Albans Cathedral Girls Choir directed by Tom Winpenny has recorded choral music by Mendelssohn for Naxos (8572836) summed up in MusicWeb International as a refreshing, enjoyable and well filled disc which can be commended to anyone. They can also be heard on sparkling form (Gramophone) in John Rutters Gloria (8572653).

Soloists include mezzo-soprano Helen Charlston, a former St Albans chorister whose distinguished career has seen her increasingly in demand in the UK and abroad, her voice described as mesmerising in Gramophone. She is joined by soprano Jenni Harper, whose performances in productions of Monteverdis Orfeo were much admired: Euridices simplicity and beauty came across with the tone perfect diction and polished singing of Jenni Harper (gscene.com).

Naxoss two volumes of Michael Haydns symphonies (8573497 and 8573498) were considered by Gramophone to be every bit the equal of many of Mozarts youthful works and allowing a greater degree of lyricism than brother Joseph would admit in his symphonies.