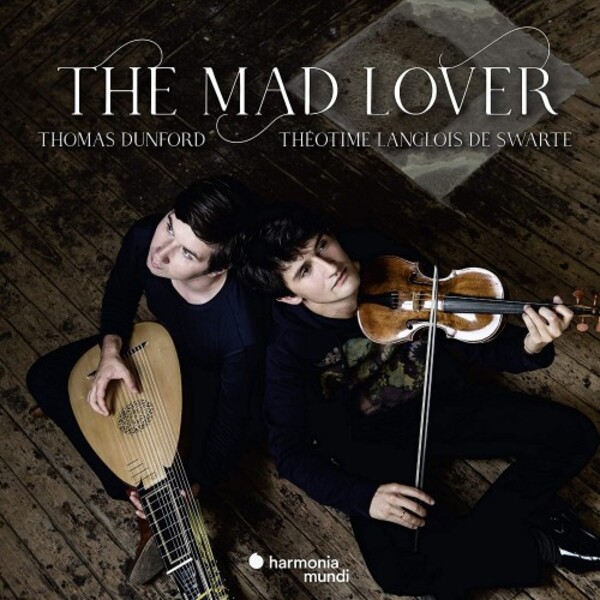 Violinist Théotime Langlois de Swarte and lutenist Thomas Dunford illuminate aspects of the elusive amalgamation that is the 17th-century English notion of melancholy. The inconsolable Mad Lover of the album title is reimagined as a character from the reign of Charles II. This tale is told through music from the pen of such violin virtuosos as the prodigiously gifted Nicola Matteis. Heightened by the exuberance and abandon common to those musicians transplanted from Italy, the beguiling nuances of this language of yearning and loss continue to echo in the popular music of our time.

There's a deep-set strand of melancholy running through English music from the days of John Dowland, through the Baroque era of Henry Purcell, and resurfacing in the twentieth century in the works of such disparate figures as Benjamin Britten and Harrison Birtwistle, among others. Sometimes coexisting with English pastoralism, at others seemingly at odds with its Arcadian visions, it has its roots partly in the tumultuous political, religious and social upheavals of the early modern era, but also in the increased awareness of self that was characteristic of Renaissance humanism. And it is a strand that is tapped into with rich artistic dividends in a new disc from violinist Théotime Langlois de Swart and lutenist Thomas Dunford on their new disc from Harmonia Mundi.

Entitled 'The Mad Lover', it is inspired in part by the incidental music composed by John Eccles (c. 1668-1735) for a 1695 revival of John Fletcher's eponymous comedy, as expanded by Peter Motteux. Its star, the famous actress Anne Bracegirdle, not only had a beauty and talent that drove many of her admirers to madness, but excelled at playing characters with troubled minds, inspiring in turn a number of 'mad scenes'. The two Grounds (quasi improvisations over a repeated bass line) by John Eccles that frame the disc are typical of the obsessively inward-looking mood that finds its outlet in so much of the music of this period. The first in particular sets the tone of deep introspection, with violin and lute together creating that atmosphere of undemonstrative directness which Langlois de Swart highlights in his illuminating introductory commentary. It's a tone that spills over into a Sonata by Daniel Purcell (c.1664-1717), cousin of the more famous Henry, and exhibiting the same gift for squeezing every bit of expressiveness out of the slow movements, while demonstrating that such exquisite reflectiveness is not necessarily incompatible with faster movements of real verve. The subtle dynamic gradations possible on Dunford's lute, as partnered with the almost vocal qualities of Langlois de Swart's 1665 Jacob Stainer violin, are heard here to beguiling effect.

A wistful lute improvisation provides a bridge to the Folia Variations by violin virtuoso Nicola Matteis (c. 1650-c. 1714), putting his own distinctive stamp on this famous 'pop' tune. Matteis's son, the 'Young Matteis'  was himself a violin prodigy, and his solo Fantasia in A minor is a mesmerising exercise in string-crossing that deserves far greater exposure, worthy to set beside the works of Biber and JS Bach, and delivered here with wonderfully whispered tones and rhythmic pliancy, as if the player is taking the listener into his (and the composers) confidence. The older Nicola's 'Diverse bizzarie' on a well-known Sarabande/Chaconne are particularly engrossing for their striking range of moods.

A G minor Sonata by John Eccles's brother Henry (c. 1680-c. 1740) 'delivered quite a thunderbolt' when discovered by these performers; and it matters not a jot that its bucolic second-movement Corrente (some nice strumming effects from Dunford here) was plagiarised from Francesco Bonporti, for the whole sequence is completely compelling. The Suite in G major by the elder Matteis seems to be a deliberate throwing down of the gauntlet to English violinists, with a mood of unaffected contentment permeating even the more wistful episodes of the Sarabanda, and finding a toe-tapping peroration in the concluding 'Turkish Gigue'.

The younger Matteis's C minor Fantasia is another miniature masterpiece for solo violin, 'one of the finest pieces for solo violin from the Baroque period' according to Jonathan Keates's booklet notes, and listening to this performance you may well find yourself in agreement: it matches invention, technical demands and expressive power in a magical balance. Langlois de Swarte's beautifully inflected playing matches it every step of the way.

Before the closing 'Mad Lover' Ground comes Henry Eccles's 'New Division' on the popular tune 'John come and kiss me', another illustration of how the worlds of 'high' and 'low' music intersected to great fruitfulness in this period, with references to musical-box charm and gentle hornpipe swagger. As throughout this disc, the intimacy of the two players is perfectly caught by engineer Hugues Deschaux, and this is an album that, for all its deep (and unexpectedly topical) introspection, still manages to wear a smile in an enigmatically English manner.