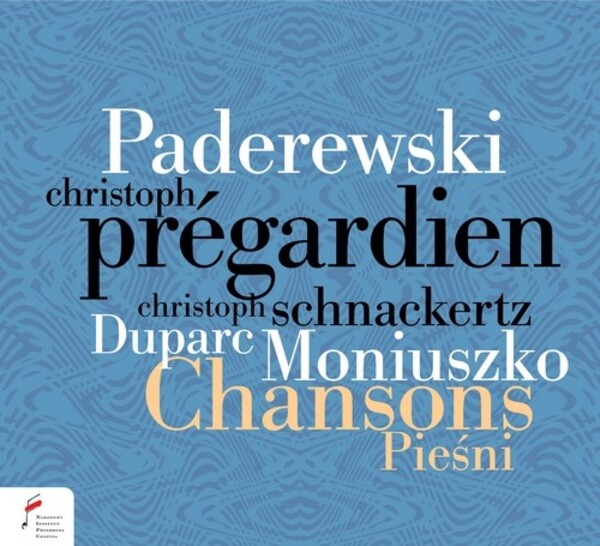 While travelling to Paris, in January 1862, Moniuszko wrote to his Vilnius publisher Adam Zawadzki asking for consent for his songs to be published in France: The opportunity has arisen to have my songs from the Songbooks published in French translation. Allow me to hope that you wont oppose it. The opportunity for a French edition arose thanks to the support of Gioachino Rossini, and negotiations with the publisher, Flaxland, were conducted on the composers behalf by his devoted friend Jozef Wieniawski.
Over the course of his long life, Henri Duparc composed only a small number of works, yet he holds an important place in music history as one of the greatest composers of French songs. As a pupil of César Franck, he aroused the admiration of both his master and his colleagues.
Paderewski composed the Twelve Songs to words by Catulle Mendès in Morges, in 1903, during a lengthy break from his concert travels. Those were happy times! he later recalled. Zygmunt Stojowski and Helena Modjeska, who were staying with him at that time, mention that he wrote quickly and with incredible facility, a new song appearing almost every day and presented to them in the evening, such that the whole set was completed in just two weeks.
Christoph Prégardien is regarded as one of the leading lyric tenors and esteemed as an outstanding interpreter of German Lieder, but his interests and experience make him the perfect candidate to present these French chansons/pieśni.

Made at the same time as an appearance at the 15th international Chopin and his Europe festival in Warsaw in August 2019 (with the theme From Chopin to Moniuszko), this recital from veteran lyric tenor Christoph Prégardien is a highly effective combination of Polish songs in French translation, a selection of songs by an undisputed French master of mélodies, and a set of French songs by the Polish pianist and statesman Ignacy Jan Paderewski. Accompanied by pianist Chrsitoph Schnackertz, Prégardien makes a highly persuasive case for all the items included here, his voice now with distinctly baritonal hints in its timbre, but sensitive as ever to the demands of text and music.

He opens with a group of songs by Stanisław Moniuszko (1819-1872), a composer best remembered for his contribution to Polish opera, above all in such works as Halka and The Haunted Manor. But he also composed a large number of songs to texts by some of the greatest Polish Romantic poets, and the proposal in 1862 for a French edition of his songs (entitled Échos de Pologne) was not only a source of huge national pride for the composer and his countrymen, but also an indication of the growing French fascination with Polish culture. The items included here give a good idea of Moniuszkos direct, unpretentious way as a song composer, aiming for a straightforward but communicative setting of texts for which he had high regard. Odyniecs Les Larmes (Tears) and Sztyrmers Les Plaintes de la jeune fille (A Girls Sorrow), both from the 1840s, are gentle vignettes of grief, the latter most effective when the vocal line seems itself to be lowered into the grave where the deceased man lies. Adam Mickiewiczs Le Chant de la tour (Song from the Tower) is imbued with a distinctively Polish tinge of melancholy, while the same poets Le Niémen (The Neman) is an intimate and poignant address to the great river to the east of Poland. A cheerful conclusion to this group of songs is the fourth part of Syrokomlas Village Lyre Player, which has a positively Schubertian jauntiness to it.

The emotional temperature steps up a notch or two with a handful of Henri Duparcs greatest mélodies, treated to exquisitely sensitive performances by Prégardien and Schnackertz. They rise to the building passions of Chanson triste, trace delicate lines in Soupir (Lament), and imbue Le Manoir de Rosamonde with a thrillingly dramatic edge with clear echoes of Wagner. Best of all, however, are the subtleties of the inward-looking Phidylé and the proto-impressionism of Baudelaires epoch-defining LInvitation au voyage, which receives what must be one of its most haunting renditions on disc, unforgettably coloured by Schnackertzs delicate pianism and Prégardiens dark-hued but still essentially light-toned voice.

Paderewskis 12 Songs to Poems by Catulle Mendès were composed in 1903 during a break between strenuous concert tours, and though little known they must surely rank among his finest achievements as a composer. They inhabit a distinctly turn-of-the-century world, and they build from a quiet opening (Dans la forêt) to a midpoint of considerable power and atmosphere (Elle marche dun pas distrait), the tension maintained through a strikingly intense Viduité (Bereft), then seemingly evaporating into lunar coldness and detachment before a return to passion in Lamour fatal, with Lennemie (The enemy) making an equally arresting postlude. Paderewski was clearly deft at creating a quasi-impressionistic soundworld, and the piano writing is often as virtuosic and technically demanding as the vocal line. The performers here do these miniatures proud, and this account should give a welcome boost to Paderewskis reputation as a song composer. As with all releases from the Fryderyk Chopin Institute, the whole of this engrossing, enterprising recital is beautifully recorded and sumptuously presented, making it a most attractive prospect for lovers of French and Polish song, as well as Prégardiens many admirers.