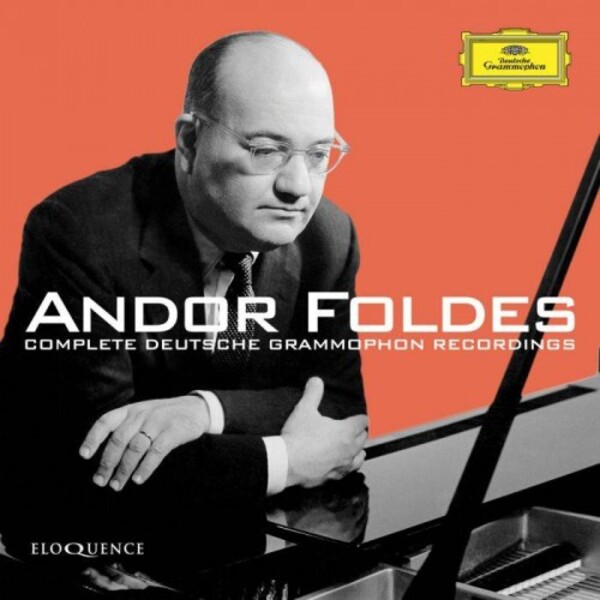 The most comprehensive tribute ever issued to Hungarian pianist Andor Foldes (1913-1992), renowned for his polished and self-effacing style, containing many recordings new to CD, freshly remastered and enhanced by an extensive booklet appreciation by Stephen Siek and rarely reproduced photographs from the DG archive.
Writing in 1961  not yet 50 years of age  the Hungarian pianist Andor Foldes cast his mind back to student days in Budapest, and to pre-war rehearsals led by Bruno Walter. We all were convinced that this was the way Mozart wanted his work to be played: without frills, without any undue virtuosity on the part of the soloist ... Playing like one big happy family, in the service of a higher power  Mozarts spirit.
Throughout his career Foldes cultivated and emulated those qualities he discerned in Walters artistry. Such modesty and assurance are the hallmarks of his recordings, beginning here with the Bartók and Prokofiev he recorded in Paris in 1949-50 and which was released on French Polydor. Memorably direct accounts of Grieg and Schumann were released on Mercury, before Foldes settled down with Deutsche Grammophon, the most lasting and symbiotically satisfying artist-label relationship of his career. DGs 1950s mono sound, analytical but not airless, was ideally suited to the Foldes sound, and he opened his account with the unlikely trio of Albéniz, Stravinsky and Virgil Thomson. Brahms, Liszt and Schumann classics soon followed: unhackneyed, freshly voiced interpretations of Romantic repertoire made in 1951-3, many of them receiving their first release on CD.
Then came a wide-ranging survey over four LPs of the solo piano music by his teacher Bartók. These recordings were recognised for their authority and authenticity, and Foldes became especially prized in his adopted home of the USA as a specialist in contemporary music. He wrote well and often about new piano music by the flourishing generation of postwar American composers, and his recordings brought spice to the fairly heavy standard fare of the DG catalogue. Insightfully straightforward sets of Mozart and Beethoven concertos straddle the mono and stereo eras, before Foldes turned in the 1960s to the foundational treasury of Beethovens sonatas - though an album of shorter works, plus a keyboard evening of shorter pieces from Bach to Poulenc showed that he continued to bestow astonishingly clean articulation and devotion to the score to all his repertoire.
Foldes plays it brilliantly, his strong fingers unerringly tracing the percussive outlines of the writing.  Gramophone, December 1949 (Bartók: Piano Concerto no.2)
Mr. Foldess rapt performance ... is exquisite.  Gramophone, September 1955 (Schumann: Fantasie)
His infallibly precise technique, his sense of control and his grasp of structure serve him well, and it stands much to his credit that for at least some of the time he gives the impression that the Copland Sonata contains some worthwhile musical thought.  Gramophone, December 1956 (Barber, Copland, Stravinsky)
Foldes, perfectly at home in this music, plays superbly.  High Fidelity, August 1957 (Kodály)
Andor Foldes reveals himself here as a Beethoven player of stature. His singing tone and sensitive style are always balanced by an original and thoughtful approach.  Stereo Review, April 1958 (Beethoven, Variations, Rondos & Bagatelles)
Mr. Foldes is one of the few pianists who can present them convincingly.  Notes, December 1958 (Brahms, Paganini Variations)
Records made by Andor Foldes never fail to interest and the works he performs here ... are played with an unblemished accuracy nothing short of astonishing. The recording is excellent.  Tempo, winter 1958 (Stravinsky, Copland)
The Pastoral is treated as an 18th-century landscape of classic dignity. This performer is an artist, and this record is as good a collection as any to define the principles on which his artistry is based.  High Fidelity, November 1962 (Beethoven, Sonatas opp. 28, 31 No.2, 81)
The performances here are restrained, delicately coloured... Foldes is no piano-wrecking virtuoso, although his technical ability seems very high. The effect he produces is rather one of intimacy and direct communication. High Fidelity, November 1962 (Beethoven, Sonatas opp. 78, 101, 109)
Mr. Foldess solid tone becomes almost meltingly lovely in some of the cadenzas, and this rarity makes it doubly effective.  High Fidelity, April 1957 (Liszt concertos)
This Hungarian pianist seems able to slip unobtrusively into any given style and offer an idiomatic rendition.  High Fidelity, June 1962 (Klavierabend)
A number of these performances remain more or less unmatched ... Sample either Out of
Doors or the Sonata and youll soon realise why these recordings have always won such extravagant
plaudits.  Gramophone, July 2014 (Bartók: Solo Works)