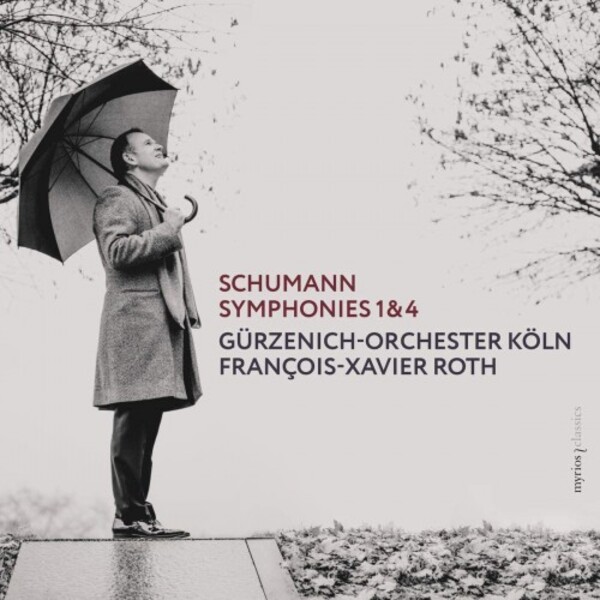 The year 1841 finally marked Robert Schumanns breakthrough as a composer for orchestra. That year, he created no fewer than two works: his First Symphony, also known as the Spring Symphony, and a piece which he initially planned as a Symphonic Fantasy in one movement, and which would later become his Symphony in D minor.
The Spring Symphony was composed in the coldest winter. Full of longing, it is a work that knows only one direction: growing, blossoming, the path to light and new life. The Symphony in D minor seems much more somber and intimate, a work from the innermost depths of his soul, as Clara Schumann noted in her diary. However, the audience could not warm up to this bold, impetuous work, and Schumann set it aside. Ten years later, after a major revision, he published it as his Fourth Symphony.
This album pairs the Spring Symphony with the original version of the Symphony in D minor, the version which friends such as Johannes Brahms preferred over the later edition. Schumann never heard it again in his lifetime, and it was not until 1889 that it was performed in public once more, by the Gürzenich Orchestra Cologne under the baton of Franz Wüllner.
François-Xavier Roth, the Gürzenich Orchestras current chief conductor, also prefers the original version. With its leaner orchestration, it is certainly the more radical one, and thus requires a higher degree of commitment from the orchestra musicians in forming crescendi, melodic phrases, and extended arcs of formal development.
The live recordings on this album bear witness to that orchestras dedication and rousing energy in concert. This first collaboration between the Gürzenich Orchestra Cologne, François-Xavier Roth and the Myrios Classics label is being released as a limited edition on SACD with two mixes, stereo and surround, as well as comprehensive liner notes in English, German, and French included in a luxurious 44 page booklet.

Although Schumanns symphonies have received a fair amount of criticism over the years for the composers alleged lack of skill in orchestration, recorded cycles by distinguished conductors ranging from Szell, Kubelík and Sawallisch to Bernstein, Zinman and Holliger have long since laid that particular ghost to rest. Those sets and others have proved decisively that its down to the skill of conductor and orchestra to convey the miracles of Schumanns inventiveness and scoring, and they have succeeded mightily. So, too, does François-Xavier Roth and the Gürzenich Orchestra of Cologne, of which he is principal conductor, in a new recording of the two symphonies Schumann composed in 1841, the year after his Year of Song: No.1 in B flat, the 'Spring' Symphony, and No.4 in D minor.

The First Symphony, actually composed in the depths of winter, positively bursts with the joys of Spring, although Schumann wisely suppressed his original descriptive movement titles, allowing the music to speak for itself. Its successful Leipzig premiere under Felix Mendelssohn on 31 March 1841 even won the approval of Schumann's crusty father-in-law, Friedrich Wieck. The D minor Symphony, however, had a more problematic genesis, its revolutionary cyclic design baffling the audience at its premiere on 6 December that year, and the performance was overshadowed by the appearance on stage at the same concert, individually and together, of Clara Schumann and Franz Liszt. Schumann withdrew the work, and it was only ten years later that he returned to it, subjecting the outer movements in particular to extensive revisions and reorchestration, adding depth but also weight and unwieldiness to the Symphony while tightening its cyclic elements. It was this revision that was eventually published as No.4. Johannes Brahms was among the first to declare his strong preference for the original version, and in recent years a number of conductors, including Goodman, Mackerras, Gardiner and Holliger, have championed its cause, sometimes alongside the 1851 revision.

Now Roth and his orchestra make a further excellent case for the 1841 version of the D minor Symphony, and it makes the ideal coupling for the 'Spring' Symphony: lithe, lean, alive with energy, and presenting two sides of the same coin. The First Symphony receives a particularly joyous performance: with minimal vibrato from the strings and what sounds to be narrow-bore brass and incisive timpani, the textures are wonderfully transparent, the tempi energetic, often urgently propulsive, uncovering dazzling and often overlooked details along the way, as in the first movement's development section. The opening fanfare is bracing but not overbearing, the woodwind solos in the introduction beautifully lit, the Allegro itself buoyant and overflowing with life. Fortes make impact without swamping detail, while softer passages are exquisitely shaded, and the movement's closing pages are thrillingly paced.

The Larghetto second movement has rarely sounded lovelier, the interplay of light and shade superbly handled, while the following Scherzo has its Beethovenian demonic side balanced by a quintessentially Schummanesque grace. As for the finale, Roth allows the music to flow at just the right pace, animated but still graceful, the phrases wonderfully supple, the tuttis forthright and infectiously joyous, capping a performance that's both uplifting and life-enhancing.

In the Fourth Symphony, one soon becomes aware of how many qualities it shares with the First, while simultaneously inhabiting its own distinctive word. Textures are again crystal-clear, but the pared-down orchestration (as compared with the 1851 revision) doesn't once feel threadbare, and Roth again has a way of bringing out detail that other conductors often miss. This lean but vital soundworld goes hand-in-glove with the Gürzenich Orchestras stylish playing, so that even in the more portentous minor-key passages theres a feeling of lightness and air. The second movement Romanza is at the heart of this performance, the central episode with its heavenly violin solo surely a tribute to Clara, the outer passages seemingly speaking of legendary times.

The Scherzo is thoroughly gripping, the pacing urgent but actually not that fast (Roth achieves urgency through balance and articulation rather than mere speed), and theres even some tastefully deployed, teasing rubato. The transition to the Finale is again superbly done, horns, trumpets and trombones splendidly expansive and grandiose, before the Allegro bursts to life. Here its the delicacy and nimbleness, both of Schumanns scoring and of the Cologne players, that is the real wonder, though the snarling interjections of the development section are not undersold. If you havent yet been persuaded of the 1841 versions merits, you need to hear this recording: expertly shaped, full of the spirit of early Romanticism, and a truly radical design that influenced Liszt, Franck, Tchaikovsky, Sibelius and many more. If it had received as persuasive a performance as this at its premiere, Schumann may well have left the score alone. Coupled with that joyous First, it adds up to one of the most exciting Schumann discs in years, a triumph for Roth and his musicians.

An irresistible romp isnt it? And thats only the first movement of Schumanns Spring Symphony. I love every moment of this recording: the transparency, yet depth of sound. And they said Schumann couldnt orchestrate? Rubbish! Conductors just dont know how to conduct him. But François-Xavier Roth does with his Gürzenich Orchestra Cologne.
Record Review (BBC Radio 3) 22 August 2020