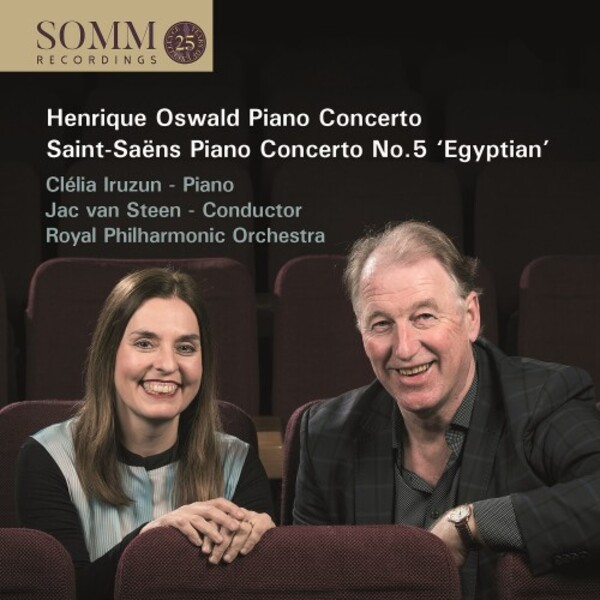 SOMM Recordings is pleased to announce the return of the acclaimed partnership of pianist Clélia Iruzun and the Royal Philharmonic Orchestra conducted by Jac van Steen with two colourful late-19th-century Romantic piano concertos from Brazil and France: Henrique Oswalds G minor Piano Concerto, op.10, and the Fifth Piano Concerto in F major, op.103, by Camille Saint-Saëns.
Iruzuns Brazilian compatriot Henrique Oswald shared a long friendship with Camille Saint-Saëns based on mutual admiration for each other as composers and pianists. They occasionally performed together some of Saint-Saënss music for two pianos in public recitals.
Saint-Saënss exotic Fifth Piano Concerto, the Egyptian, was composed during a North African holiday in 1896. Combining complex piano writing with a deft lightness of touch, it boasts a lyrical main theme (described by Saint-Saëns as a Nubian love song), hypnotic echoes of the gamelan and a finale bursting with virtuosity.
Oswalds Piano Concerto was composed in Italy a decade before Saint-Saënss Egyptian. With bravura passages recalling Saint-Saënss Second Piano Concerto, its richly Romantic vein carries allusions to Fauré while brimming with Oswalds intriguing native Brazilian rhythms.
Like Oswald, Alberto Nepomuceno was a Brazilian who studied in Europe, later succeeding him in a prestigious teaching position in Rio de Janeiro. Modelled on Griegs Suite from Holbergs Time, his Suite Antiga (Suite in the Old Style) combines Baroque style and Romantic attitude with a bewitching savoir faire.
Gavin Dixons informative booklet notes trace the revealing connections between all three composers.
Clélia Iruzuns previous SOMM recording with the RPO and Jac van Steen  Piano Concertos by Albéniz and Mignone (SOMMCD265)  was nominated for an International Classical Music Award in 2019 and described by Gramophone as a valuable release... very well recorded.
A collection of late-Romantic and contemporary works for piano and string quartet from the Americas, Treasures from the New World (SOMMCD0609), Iruzuns most recent SOMM release with the Coull Quartet, was hailed by Gramophone as beautifully paced... a delight, as the disc is as a whole.