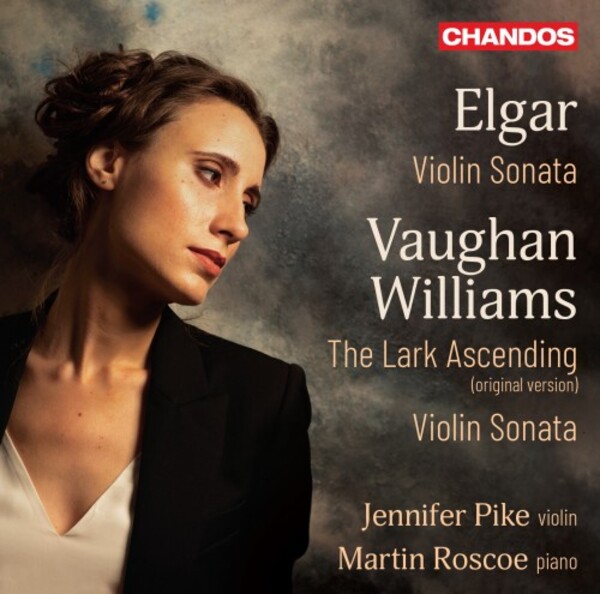 Following the success of her last album, The Polish Violin, Jennifer Pike now turns to a programme of English music that represents an essential part of her musical make-up. It was the music of Elgar that first drew her to the violin, and The Lark Ascending has featured in her programming  in many versions  throughout her career. Here we have the original version for violin and piano from 1914, much less frequently played than the standard orchestral version, but fascinating for the new light it shines on such a well-known piece. Writing it against the backdrop of the First World War, Vaughan Williams took both inspiration and the title from a poem by George Meredith.
Although his first sketches for a violin sonata date from 1887, Elgars Violin Sonata is one of the four late masterpieces that Elgar composed in 1918-19, at Brinkwells in Sussex in his final creative flush. As with The Lark, this work was composed under the shadow of the Great War.
Like Elgar, Vaughan Williams wrote his only Violin Sonata towards the end of his life. Representing a culmination of the development of his compositional style, he weaves fantasy and pastoralism into the strictures of sonata form.
Jennifer Pike is joined for this album by one of her regular musical partners, the pianist Martin Roscoe.

Though still only 30 years of age, violinist Jennifer Pike already has a solidly-built catalogue of recordings behind her, ranging from acclaimed discs of Polish and Czech works for violin and piano to the great concertos by Mendelssohn and Sibelius. She may have resisted the starrier, more headline-grabbing strategies of some of her colleagues, but, having started her career as something of a prodigy, her steady approach to developing a distinctive profile has reaped huge benefits in terms of the quality and depth of her music-making. A case in point is her latest release, accompanied by the ever dependable Martin Roscoe at the piano, in violin sonatas by Elgar and Vaughan Williams.

Though praised on its premiere in 1919, Elgars E minor Violin Sonata has only relatively recently become a firm favourite with violinists in the recording studio. One of three works (the others being the String Quartet and Piano Quintet) composed in 1918 during a period of renewed strength following his move to a new country home at Brinkwells near Fittleworth, West Sussex, which stand together with his Cello Concerto as Elgars last great creative flowering, the Violin Sonata pays obvious tribute to his new, idyllic rural surroundings in music of rapt lyricism, as well as subtle nostalgia for an Edwardian era lost forever to the horrors of the Great War. Pike understands this inherent duality from the outset, and her playing has an urgency that doesnt distract from the more reflective, poetic aspects of the work. Her playing combines vigour with immaculate intonation and exquisite cantabile tone, gentle gradations of pianissimo as well as ardent intensity. The emotional range is cast wide in the opening movement, and the tone deepens still further in the central Romance, where every throwaway gesture seems loaded with implied meaning, the intersection between a fondly remembered past and a bittersweet present.

The third and final movement appears to start out most idyllically of the three, yet the return, just before the coda, of the middle section from the Romance recalls another moment of intense sadness, added to the work after the unexpected death of the Sonatas dedicatee, Marie Joshua, just days after she had written to Elgar expressing her honour in accepting the dedication. In his own comments, Elgar emphasised the works traditional credentials, yet at the hands of Pike and Roscoe it is a work of remarkable resilience and potency, and it receives from them one of the most persuasive performances on disc, certainly one to make one reevaluate its place within the composers oeuvre and within the violin repertoire in general.

Much rarer on record is the A minor Violin Sonata by Elgars successor as Englands leading composer, Ralph Vaughan Williams. Composed in 1954, it is another late work, again with a three-movement design, but here the similarities end. The opening movement is a Fantasia which contains elements of sonata form but in which the modally inflected themes are in a state of continuous development. The middle movement is a biting Scherzo with more than a nod to the modernism of Bartók and Shostakovich, yet with unmistakable English roots, while the finale is a highly distinctive theme and variations, including canonic as well as instrumental solo episodes, an elegiac variation for the violin, and a rhapsodic recall of the opening Fantasia. As with the Elgar work, the emotional, tonal and dynamic range is wide, although the work has more edge, and arguably less wistfulness. Once again, Pike and Roscoe do the work proud in a performance that brings out the musics strengths as well as its striking originality. Indeed, it emerges as an ideal coupling for the Elgar, complementary in many ways, but also with some striking parallels in a bittersweet longing for a vanished past.

The disc is rounded off with the original version, for violin and piano, of Vaughan Williamss perennially popular romance The Lark Ascending, to which the end of the preceding Sonata seems to allude. Here Jennifer Pikes tone is simply magical, conjuring up a kaleidoscope of imagery that more than makes up for the loss of orchestral colour: indeed, there are details that emerge with greater clarity in this version, while it seems expressively to provide the necessary balm for the emotional wounds of the two Sonatas. Composed some years before the Elgar Sonata, but premiered after it, The Lark here ties up the loose ends very nicely to a disc that no lover of English music will want to be without. Its certainly one of Pikes best yet  which is saying much.