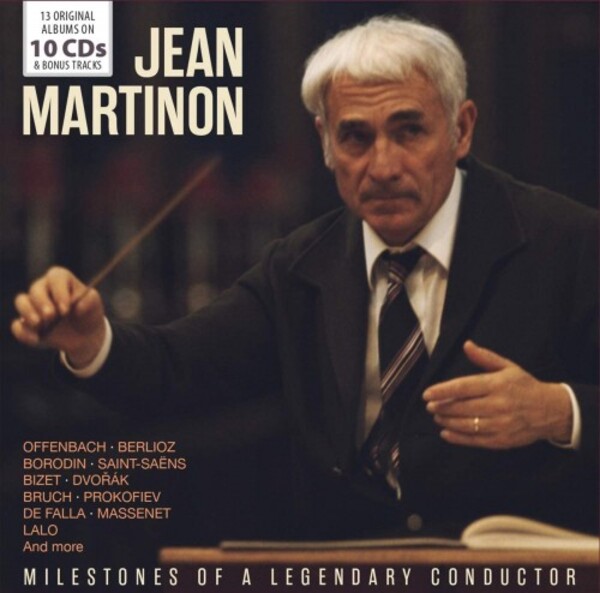 Giselle
Si j'etais roi (If I were king)

Symphony no.2 in B minor

Giselle
Si j'etais roi (If I were king)

Symphony no.2 in B minor

Jean Martinon is probably the most important French conductor of the generation between Pierre Monteux and Pierre Boulez. The conductor, born in Lyon in 1910, studied with Albert Roussel, Vincent dIndy, Roger Desormière and Charles Munch in Paris, all the while also making his mark as a composer. After the war Martinon conducted the London Philharmonic Orchestra, took over the Parisian Orchestre Lamoureux in 1951  and also the Société des Concerts du Conservatoire, where he was the understudy to Charles Munch  and the Israel Philharmonic Orchestra from 1957 on. He was the first French conductor to be entrusted with a prestigious position in Germany when he was appointed General Music Director in Düsseldorf in 1960. In 1963 the conductor conquered the US and took over the legendary Chicago Symphony Orchestra from Fritz Reiner.
Martinon was particularly renowned as a specialist for the French repertoire of the early 20th century. The present documentation of original albums from 1951 to 1961 identifies him as an interpreter dedicating himself to the works with charm, wit and intelligence, all the while combining urgency with grace, warmth and emotion. Quite a few of his recordings received high accolades and are still considered to be milestones. Martinon also made exceptional recordings of the Russian repertoire, his Prokofiev and Shostakovich recordings in particular are still held in high esteem.