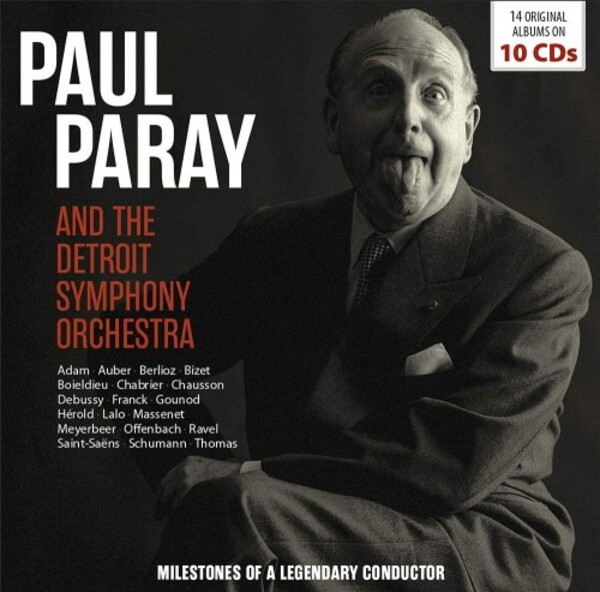 Paul Paray and the Detroit Symphony Orchestra: Milestones of a Legendary Conductor

Si j'etais roi (If I were king)

Si j'etais roi (If I were king)

When Paul Paray (1886-1979) came to Detroit from Paris in 1951, he already enjoyed a considerable reputation as a composer and conductor in Europe. The industrial centres around Lake Michigan were at the heart of the North American economy. In Chicago, Cleveland and Pittsburgh, the cultural institutions, especially the symphony orchestras, profited from the wealth of the region. In Detroit, the worlds largest centre of the auto industry, Paray was to bring the local orchestra to the highest level. The exceptional way in which he succeeded in doing just that, makes the ten CDs of this documentation a very special listening experience. Paray, who led the orchestra until 1963, after which he returned to Europe, was aided in this by an outstanding recording technique that has set benchmarks until today. It also was to benefit lesser known works and composers from 19th and early 20th century France, which Paray included in his programmes. His sensitive handling of the music of German romanticism is also clearly recognisable in the complete recordings of the Schumann symphonies, which form the conclusion of this 10-CD box.
Parays musical journey began in Rouen, in the boys choir of the cathedral, and on the organ there, on which he began to improvise as a boy. After his studies at the Paris Conservatory, he was awarded the 1st Grand Rome Prize in 1911. This was followed by directing the orchestras Lamoureux and Concerts Colonne and conducting at the Paris Opéra. A highlight in the life of the composer Paul Paray was his Mass for Joan of Arc, which was performed in Detroit on the occasion of the 500th anniversary of her death in 1956.