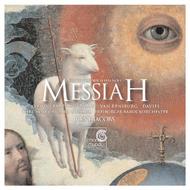 René Jacobs follows the highly theatrical Saul, and ecstatic reviews for the neglected La Clemenza di Tito, with Messiah, in the 1750 version with two alto soloists.

Kerstin Avemo got her big break singing the title role in Lulu at the Gothenberg Opera in 2002. She took part in the European tour of Messiah with René Jacobs in December 2005, and sang Mozarts C minor Mass with the Royal Stockholm Philharmonic Orchestra in January 2006.
Patricia Bardon was the youngest prizewinner at the Cardiff Singer of the World Competition and quickly became one of the worlds leading opera and concert artists. In Handelian repertoire, she has appeared as Ruggiero (Alcina) in Montpellier and Trieste, Bradamante (Alcina) at Drottningholm, Rosmira (Partenope) in Chicago, and in the title role of Giulio Cesare in Barcelona.
After making an acclaimed debut as Oberon in Brittens A Midsummer Nights Dream, the American countertenor Lawrence Zazzo sang the title roles in Arminio and Alessandro Severo at the London Handel Festival. His other appearances have included Ottone in Monteverdis Lincoronazione di Poppea (Paris), Handels Agrippina (La Monnaie) and Rinaldo (Montpellier) and Scarlattis Griselda (Berlin) with René Jacobs,Arsamene in Serse with William Christie (Paris), Rodelinda with Trevor Pinnock (Glyndebourne and Karlsruhe), Glucks Orfeo in the Netherlands and Giulio Cesare at Drottningholm. Among his recordings on CD and DVD are Rinaldo, Saul and Griselda for harmonia mundi.

Kobie van Rensburg made his debut in Mozarts Die Entführung aus dem Serail (Belmonte) at the age of 20. In 1994 he joined the company at the Bavarian State Opera, followed in 1995 by the Staatstheater am Gärtnerplatz in Munich, of which he is still a member today. He has appeared at the Metropolitan Opera in New York, the San Francisco Opera, the Berlin, Stuttgart and Munich State Operas, the Châtelet and Théâtre des Champs-Élysées in Paris, and all the major operatic centres.
The Welsh bass Neal Davies won the Lieder Prize at the Cardiff Singer of the World Competition in 1991. Since 1992 he has been a regular guest at the Edinburgh Festival (under Gennady Rozhdestvensky, Donald Runnicles and Sir Charles Mackerras) and the BBC Proms. His recordings include Brittens A Midsummer Nights Dream with Sir Colin Davis, Messiah,Theodora and Saul with Paul McCreesh, LAllegro, il Penseroso ed il Moderato and Vivaldi cantatas with Robert King, and songs by Dutilleux with Yan-Pascal Tortelier.
The Choir of Clare College gives frequent concerts, both in the United Kingdom and abroad. It regularly contributes to the Choral Evensong broadcasts on BBC Radio 3. In December 2005 the Choir took part in the highly successful tour of Europe with Freiburger Barockorchester and René Jacobs, performing Handels Messiah which culminated in this recording for harmonia mundi.