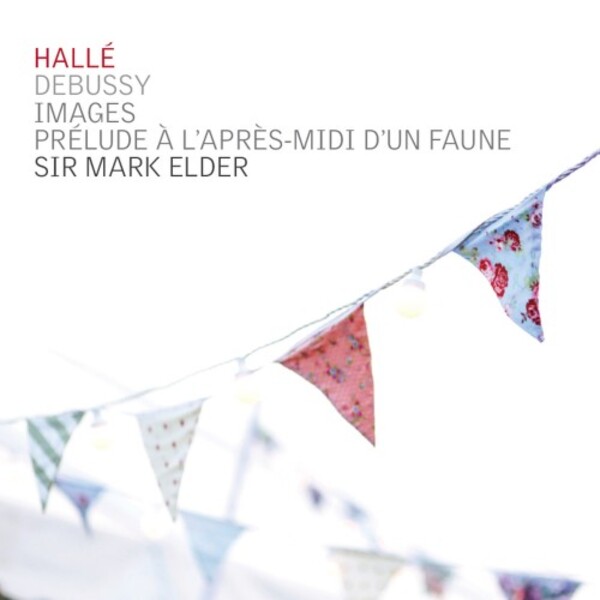 The Hallé and Sir Mark Elder follow their recent highly acclaimed Debussy Nocturnes album, with a stunning orchestral collection including a world premiere recording.
Debussy took seven years to produce Images, following the success of La Mer, and the resulting work, which was hailed by Ravel, displays the composers mastery in varied material which is at times strident, eschewing any hint of Impressionism (a term he disliked), lush and evoking feelings of loss and alienation.
Pierre Boulez claimed that modern music was awoken by Debussys response to Mallarmés poem LAprès-midi dun faune and the work, with its sumptuous opening flute line, certainly established the composers credentials and has rightly become a cornerstone of orchestral repertoire.
The album features a world premiere recording of Colin Matthewss orchestration of Et la lune descend sur le temple qui fut, from the Second Book of Images for piano. This arrangement follows Matthewss universally acclaimed orchestrations of the Debussy Préludes and of Les soirs illuminés par l'ardeur du charbon featured in the recent Nocturnes release.
Debussy himself arranged his piano waltz La plus que lente, said to have been inspired by a fiddler at the New Carlton Hotel in Paris. Delicately orchestrated, it is a delightful piece characterised by a constantly changing tempo.
Previous Debussy albums from the Hallé won numerous accolades.
Debussy, whose music Mark Elder and the Hallé orchestra have made something of a speciality in a series of top recordings  Stephen Pritchard, The Observer, November 2019
Yet more ravishing Debussy from Sir Mark and his revitalised Hallé.  Music Web International (CDHLL7552)
Rarely have I heard the hostility of the sea evoked as eerily as in [Mark Elders] polished account of Debussys La Mer.  The Observer (CDHLL7513)
more than orchestrations, they are recreations achieved by entering into the mind and thought of the original composer. Beautiful performances.  The Sunday Telegraph (CDHLL7518)