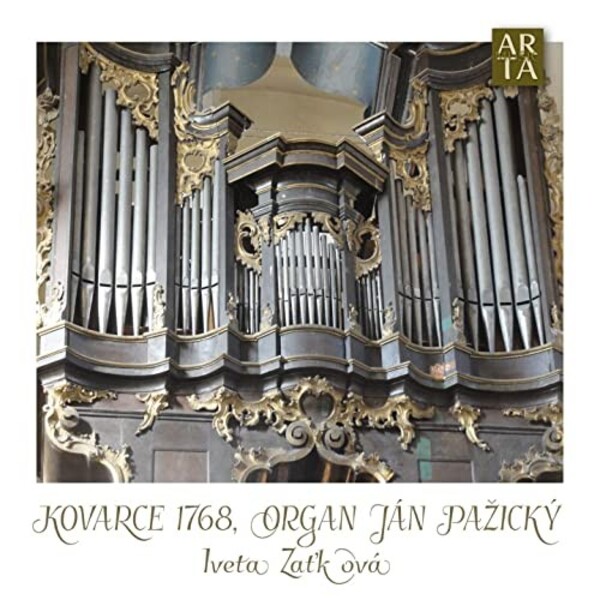 Keyboard Sonata no.1 in F major

Sonata in A major

Keyboard Sonata no.1 in F major

Sonata in A major

Just ten kilometres from Topoľčany on the way to Nitra, at the foot of the peak Veľký Tribeč, lies Kovarce, a picturesque village with 1,600 inhabitants. The first written mention of the town is dated 1280, but archaeological findings show that the area has been inhabited since prehistoric times. One of the local landmarks is a church dedicated to Saint Nicholas, built in 17551758. The church itself and its surroundings are a protected landmark, and the churchs Baroque interior has been preserved. A recent archaeological survey revealed that the foundations date from the fifteenth century, and probes discovered the crypts where among those buried is Anton Wels, an ancestor of the famed Oscar-winning Hollywood actress Audrey HepburnRuston, known for the movie Breakfast at Tiffanys, among others. In the choir loft, there is a rare organ from the workshop of the Rajec organ builder Ján Paický (1768). As one of the oldest and most valuable organs in Slovakia, it appears on Slovakias List of National Cultural Monuments. At the time, building this 10-register positive organ cost 470 guilders. The instrument was used for more than a hundred years without any repairs. In 1870, the organ builder Martin aek expanded the organ, adding a pedal with three registers located in a separate case behind the organ and equipped with new bellows. There are also records of repairs performed by Josef Kmoek from Kutná Hora in 1975. The organ builder and restorer Vladimír Gazdík took part in further maintenance and repairs during the years that followed. The organ has been carefully prepared for this CD recording by the organ builder Antonín Habětín. The instrument is decorated in Rocaille style, and the façade pipes are decorated with diamond shapes. Of the original decorative figures in the form of sculptures of six angels playing heavenly music around the Holy Trinity, only one has been preserved; the others were stolen.
Thanks to the efforts of Fr. Ondrej Tepličanec, who was in charge of the parish from to 2002 until 2019, an international organ course takes place each year in Kovarce under the guidance of leading instructors specialising in organ music. Since 2013, the event has been organised by the director of the Tribeč Education Centre, Július Krajčík. The chief artistic supervisor is Jaroslav Tůma, a professor at the Academy of Performing Arts in Prague. The year 2018 was the 250th anniversary of the organ in Kovarce, and the jubilee was the impetus for issuing a CD primarily as an expression of appreciation and respect for this extraordinary instrument. Although the organ has not yet undergone complete restoration, it is noteworthy how extraordinarily it has managed to avoid the pitfalls of earlier times.
The repertoire of the CD is diverse, ranging from the Renaissance to music of the Classical period, in order to give the listener a chance to enjoy and experience the widest possible range of sonic qualities of Paickýs organ. Even with the small number of registers, their plentiful combinations allow a constellation of colours that suit complex Baroque polyphony as well as clarity and comprehensibility for the simpler homophony of chorales or the music of the Classical era. The CD begins with a composition that is attributed to J.S. Bach. Although Bachs authorship has been called into question, the beauty of this joyous, festive music remains undiminished. Marckfelner, an organist from Levoča from the seventeenth century, his Bohemian contemporary Adam Michna of Otradovíce, and in a certain sense even Tůmas compositions in the Baroque style belong to the sphere of central European music. Mysliveček was also born in central Europe, but he also represents Italy, along with Gabrieli, because he spent his entire musical career there. England is represented on the CD by Gibbons and Arne, and Germany by Pachelbel, Hofhaimer, and Steigleder. In terms of musical forms, compositions in the concertante style alternate with such variation forms as the passacaglia or polyphonic forms like Gibbons Fantasia or Steigleders Toccata. The goal is to present music that is historical but also still interesting and viable today  music that can captivate, entertain, and please every perceptive listener.
 Iveta Zaťková
Iveta Zaťková studied the field of musical drama at the Dezider Kardo Private Conservatoire in Topoľčany under the guidance of the actor Marián Geiberg. In 2007 she completed her piano studies with Denisa Krajčovičová and her organ studies under Juraj Mičúnek. She then earned a Bachelors Degree at the Academy of Performing Arts in Prague under Prof. Jaroslav Tůma and Pavel Černý and a Masters Degree at the College of Catholic Church Music and Music Education in Regensburg, Germany, under Prof. Stefan Baier. She has taken part in organ festivals and master classes under leading pedagogues. She is a laureate of the 2005 All-Slovakia Young Organists Competition in Koice and the winner of the 2007 Humpolec-Polná Competition. She has presented herself in concerts in Slovakia, the Czech Republic, Germany, Italy, Austria, Poland, and Ireland. She is currently studying harpsichord performance under Prof. Vojtěch Spurný, and she teaches at the Dezider Kardo Private Conservatoire in Topoľčany (organ and harpsichord) and is the organist at the Church of St Ladislaus and St Gorazd in Topoľčany. She also serves as the organist for the local Choir of the Church of the Assumption of the Virgin Mary.