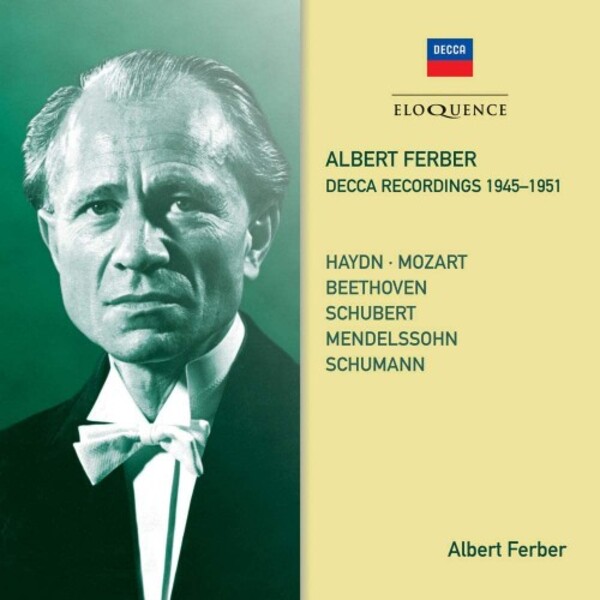 Born in Lucerne in 1911, Albert Ferber studied with a pupil of Alfred Cortot and often played for Rachmaninov in Switzerland. International critics visiting the 1939 Lucerne Festival were impressed by an exceptional Swiss pianist ... who also showed in works of Schubert and Schumann some uncommon pianistic gifts.
Such sympathy of idiom is readily apparent in Ferbers postwar Decca recordings, made in London. His pedigree in Schumann was unimpeachable: in 1951 he partnered Clara Schumanns pupil Adelina de Lara in a performance of Schumanns Andante and Variations, op.46 for two pianos at her Wigmore farewell recital. Around the same time he made this recording of Kinderszenen, which was issued on a 10-inch LP with a selection of Mendelssohns Songs without Words.
Critics tended to focus on Ferbers sensitivity, grace and musical intelligence, and these qualities distinguish the Beethoven and Schubert sonatas on this newly remastered compilation. He recorded them both in 1946, having begun to record for Decca in December the previous year. Those initial sessions included two short pieces of Mozart which were never issued but have turned up on a test pressing and are included here. Likewise receiving its first publication in any format is Haydns C major Fantasia, a performance from May 1947. This compilation demands the attention of all pianophiles and is further enhanced by an introduction to Ferbers life and art by the piano-music expert Jonathan Summers.
Not another keyboard-racer, but a pianist of outstanding musical quality ... a very warm-hearted and intimate performance of Beethovens beautiful sonata ... Albert Ferber is very successful at catching the changing moods of the music ... His scale passages are beautifully even and his singing tone is a joy.  Gramophone, March 1947
His feathery touch in the last movement is delightful ... and there are some lovely moments in the slow movement and a fine feeling for the delicate harmonic clashes which are one of [the sonatas] most beautiful features.  Gramophone, October 1948 (Schubert)
[Ferber] produces some beautiful tonal gradations; that he is not wanting in feeling may be seen in the admirably handled Träumerei.  Gramophone, March 1952 (Schumann)