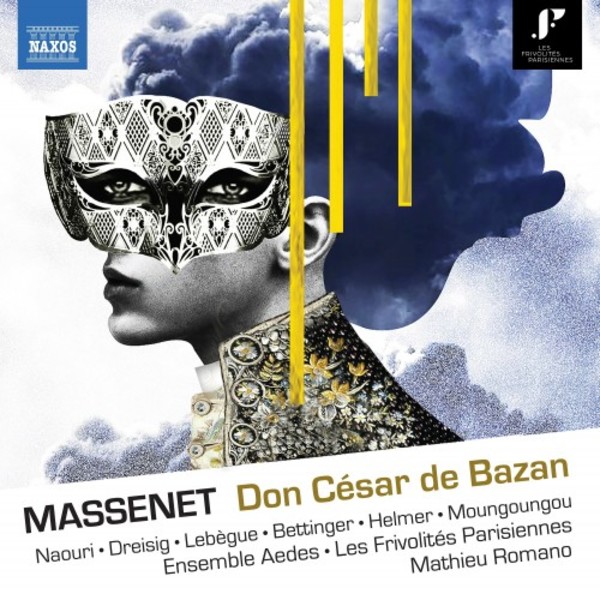 Don César de Bazan is an opéra-comique with a narrative of dashing Spanish chivalry and romance. Its plot revolves around deception and comedies of reversed identity, with a struggle between true nobility and wicked selfishness maintaining an animated momentum throughout. This was the young Jules Massenets first full-length opera and yet it is filled with the composers mature symphonic style, his gift for melody, feeling for the picturesque, and vivacity of rhythm. These distinctive qualities reveal an operatic feast whose time has at last arrived.
Massenets Don César de Bazan has for many years been known only by its famous Sevillana, a favourite showstopper in recitals for the soprano voice. The 2019 revival of this opera in the Théâtre de la Porte Saint-Martin was critically acclaimed. A great time! was had by the writer of the zenitudeprofondelemag.com blog, and the production was considered an astonishing renaissance in forumopera.com.
This release follows the world premiere recording of Aubers La Sirène (8660436) from Les Frivolités Parisiennes conducted by David Reiland, released in April 2019. It received an ICMA Nomination, and a 5-star rating from Pizzicato: Belgian conductor David Reiland shows a keen sense for Aubers light and elegant music, but does not miss the opportunity to give the more dramatic passages the necessary impetus. [The] cast is good too, so that this is a really recommendable release.
The strong cast for this production is led by baritone Laurent Naouri (Don César de Bazan), who has become a veteran of leading roles at prestigious venues all over the world. His Naxos recordings include the role of Fieramosca in Berliozs Benvenuto Cellini (211057576) and in Ravels Chansons (855417677) of which Gramophone wrote this is not an interpretation any Ravel lover would want to miss.
Soprano Elsa Dreisig (Maritana) was awarded First Prize as best female singer in 2016 at the international vocal competition Operalia, Opernwelt naming her Young Artist of the Year just a few weeks later. In 2017 she was awarded the prize Young Opera Artist of the Year at the Copenhagen Opera Festival.
Conductor Mathieu Romano works within all genres from the Baroque to the contemporary, both on the concert stage and in opera. Romano has worked with ensembles such as the RIAS Kammerchor and the Latvian Radio Choir, and on operatic productions with Les Frivolités Parisiennes and contemporary projects with Ensemble Itinéraire. He also works with the Nederlands Kamerkoor, the Normandy Regional Orchestra, Les Siècles and Sinfonia Varsovia. He regularly appears with Ensemble Aedes, of which he is the founder and artistic director. His discography includes a number of acclaimed releases devoted to choral repertoire.
Cast:
- Don César de Bazan: Laurent Naouri (baritone)
- Maritana: Elsa Dreisig (soprano)
- Lazarille: Marion Lebègue (mezzo-soprano)
- Kings Charles II of Spain: Thomas Bettinger (tenor)
- Don José de Santarém: Christian Helmer (baritone)
- Captain of the Guard: Christian Moungoungou (baritone)