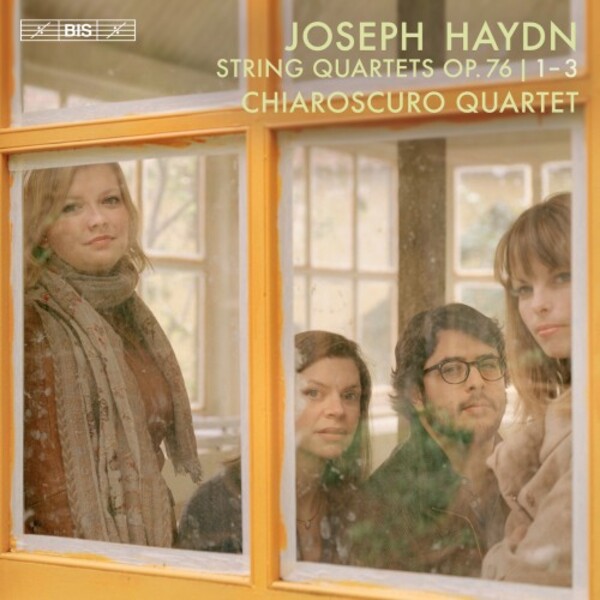 The Chiaroscuro Quartet made their first appearance on BIS with acclaimed recordings of Joseph Haydns Sun Quartets, op.20, described in The Strad as period-instrument performances of the utmost subtlety and refinement. The Op.20 quartets are widely regarded as a milestone in the history of the genre. When Chiaroscuros now return to Haydn, it is with his last complete set of quartets, begun in 1796 when he was 64 years old.
The Six String Quartets, op.76, form one of the most renowned of Haydn's sets of quartets, and carry the stamp of their maker: no other set of eighteenth-century string quartets is so diverse, or so unconcerned with the norms of the time. In the words of Haydns friend and contemporary Charles Burney, they are full of invention, fire, good taste and new effects. On the present disc, the first of two, we hear the first three quartets, including the Fifths Quartet (no.2), so named after the falling perfect fifths with which it begins. The most famous of the set  and possibly of all Haydn quartets  is no.3, however: the Emperor Quartet with its second movement: a set of variations on the Kaiserlied which Haydn had recently composed to the greater glory of the Austrian Emperor Franz II.
Chiaroscuro Quartet:
- Alina Ibragimova (violin)
- Pablo Hernán Benedí (violin)
- Emilie Hörnlund (viola)
- Claire Thirion (cello)

For the many people currently seeking solace in lockdown listening, few other genres offer the comforts of the string quartet, and few other composers rival the talents of Haydn  the Father of the string quartet  in combining popular appeal with exquisite refinement and searching inwardness. Following their outstanding accounts of Haydns landmark Opus 20 Quartets on the BIS label, the truly international Chiaroscuro Quartet  led by star violinist Alina Ibragimova  now turn their attention to the first three of the same composers Opus 76 set. Begun in autumn 1796, a year after Haydns second triumphant visit to London, they represent the pinnacle of his art as a quartet composer. As the music historian Charles Burney wrote to Haydn, they are full of invention, fire, good taste and new effects, and seem the product, not of a sublime genius who has written so much and so well already, but one of highly-cultivated talents, who had expended none of his fire before. And its that sense of blazing freshness that emerges so clearly in these performances, played on gut strings, with classical bows and immaculate period stylishness. Vibrato is deployed sparingly and with a fine feel for nuance, but the tone throughout, topped by Ibragimovas Anselmo Bellosio instrument, is tastefully sweet, the phrasing and dynamics beautifully thought out.

Proceedings get off to a cracking start with the G major Quartet, its opening chords a call to attention, followed immediately by a prime example of the popular mood Haydn had honed to perfection in London. With both halves of the first movement repeated, the lovely, unmarked sotto voce on the second time round at bar 195 serves as ideal preparation for the mezza voce of the following Adagio sostenuto. Here, the offbeat violin 1 notes in the first episode are lovingly shaped, as are the duetting violins before the third statement of the theme. In the Chiaroscuros hands, the latter stages of this heavenly movement anticipate the hymnlike intensity of Beethovens late quartets.

The Presto Minuet flies past like a breeze, an unmistakably Haydnesque version of the Beethovenian scherzo being developed at the same time, while the Trio with its violin solo against pizzicato accompaniment dances delightfully, and Ibragimova has great fun with some teasingly lengthened upbeats.

The Finale begins unexpectedly in G minor; its closing theme, with the accent thrown onto second-beat syncopations, is perfectly weighted here, while the tension in the harmonically tumultuous development is superbly shaped and built to create maximum impact at the disarmingly soft emergence of the tonic major. The double-joke of the throw-away ending, in Haydns most appealingly vernacular vein, caps a superb performance that brings out all the colour of this brilliantly orchestrated quartet.

Known by the popular nickname Fifths after its bald opening motif, the D minor Quartet opens with a first movement of ghostly, otherworldly feel that is far removed both from Mozarts minor-key pathos and Haydns own Sturm und Drang phase. The mood is particularly haunting when the instruments are in close imitation in the development section. There are some nicely judged rhetorical pauses, and once again all repeats intact; the way the players charge to the movements close helps to maintain the overall feeling of urgency.

The serenade-like Andante brings much-needed relaxation, and even the minor-key central section has to it a gentle hue, while Ibragimovas virtuoso violin embellishments of the main themes return are have a wryness to them that will unfailingly raise a smile. The octave canon of the so-called witches Minuet is followed by an earthily rustic Trio where the players dig in without overstepping the bounds of period-style propriety. In the finale, Ibragimova once again teases the listener (in perfect Haydnesque style) with the paused notes that end the first phrase, and the movement as a whole moves along with a powerful inevitability leading to the sunlit major-key peroration.

The C major Emperor Quartet opens with a sense of perfect equilibrium, with salonesque refinement and popular jauntiness held in ideal balance until the eruption of E major musette-style drones in the development section. Once again, the observance of the second-half repeat reaps huge rewards in terms of overall formal balance as well as the excitement of the più presto marking for the codas reprise.

The second-movement variations on Haydns Kaiserlied that give the Quartet its nickname are pure joy here, not too reverential, with the first part of the Poco adagio indication taken into due consideration, and the cantabile marking evident in a manifestly singing style. With each member of the quartet in turn given the main theme for a variation, this is perhaps the purest embodiment of chamber-music democracy, building to the exquisitely poised and scored textures of the final variation. The Minuet sees another return to Haydns best popular style, while the A minor Trio seems to glance far ahead into the 19th century with its pre-echoes of Schumanns great Piano Quintet.

Once again Haydn takes the listener unawares with a Finale that for the most part occupies the tonic minor, and once again the Chiaroscuro players deliver playing of huge passion and stylishness, the bubbling triplets of the cello and viola (later to be tossed between the violins) injecting real urgency into the proceedings. Theres a Mendelssohnian fleetness to the development section and, notwithstanding the eventual, initially tentative emergence of the tonic major, the players keep up momentum right to the end. In doing so, they seem to be looking forward keenly to the continuation of the project, including the glorious Sunrise Quartet (no.4). And, like them, we cant wait!

This is surely now a top choice among discs of these much-recorded works for those wanting excellent modern sound, musical insight and faultless stylishness. Haydn playing at its very best: what more could one ask for? The splendid recording, produced by the ever-reliable Andrew Keener, the presentation, and even the Habsburg yellow decor on the cover photo, all add to the sense that this is a very special disc indeed.

Coincidentally, this week also sees the release Ibragimova in the role of soloist, a stunningly intense account of Shostakovichs two violin concertos on the Hyperion label, with the Evgeny Svetlanov State Academic Symphony Orchestra of Russia under Vladimir Jurowski providing unmistakably slavic-flavoured support. Ibragimova and Jurowski seem to have an instinctive rapport in all their collaborations, and this disc, a strong contender for those wanting both these works on a single disc, will certainly further delight the violinists many admirers.