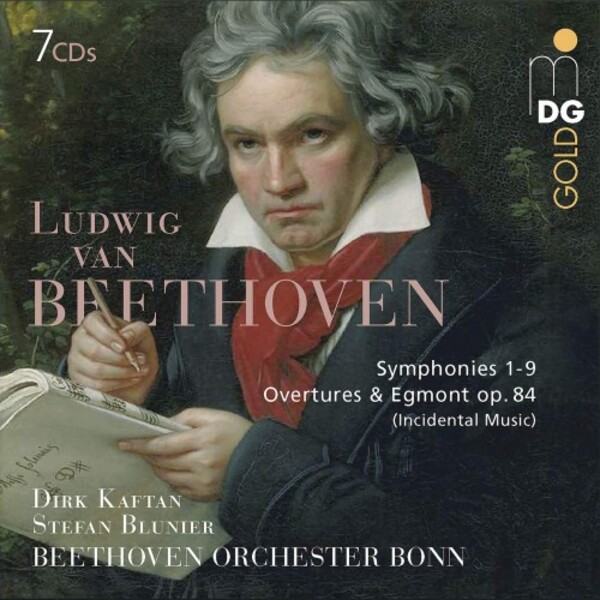 The Bonn Beethoven cycle won unanimous praise from the music press when released individually.
The Pastoral: Rewarding!; the Eroica: Magnificent, intense, and genuinely beautiful; the Seventh: Superbly transparent. For the 250th anniversary of the birth of Bonns most famous son, his nine symphonies are now being released in an attractive box set, along with some rarely performed overtures and  as a special treat  Egmont in a new recording with the fabulous Matthias Brandt in a compelling new version of this gripping drama prepared especially for the occasion.
All these works have of course been captured in the finest Super Audio CD technology and lovingly mixed in a genuine three acoustic dimensions. If you have not yet experienced the advantages of the 2+2+2 recording technique developed by MDG, which conveys the acoustics of the Beethoven Hall and the radiant power of the Beethoven Orchestra in the finest detail and true to the original, then you should absolutely listen to this set.
The history of the orchestra dates back to 1907, when the Beethovenstadt was given its own orchestra after the court chapel was dissolved in 1794. Conductors such as Richard Strauss, Max Reger, Volker Wangenheim, Dennis Russell Davies, Marc Soustrot, Roman Kofman and Kurt Masur established the orchestra in the top class in Germany. Most recently, the Swiss Stefan Blunier and Christof Prick have conducted the orchestra.