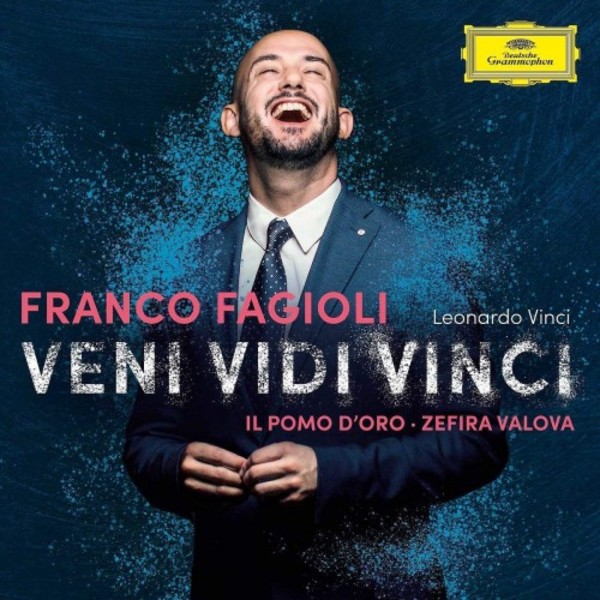 Since signing to Deutsche Grammophon in 2015, Argentinian countertenor Franco Fagioli has starred in two operas for the label (Glucks Orfeo and Handels Serse), as well as a pair of operatic recital discs, featuring works by Rossini and Handel. The latter was hailed by Gramophone as one of the finest Handel recitals in a while. Blessed with a rich, colourful tone, intense vibrato and a natural penchant for coloratura challenges, Fagioli now turns his attention to less familiar repertoire, and the results are as rewarding as one could possibly have hoped. Accompanied by the outstanding Baroque ensemble Il Pomo dOro under the direction of concertmaster Zefira Valova, he presents a programme of arias by Leonardo Vinci (?1696-1730).

Born in Strongoli, Calabria, Vinci spent his working life in Naples, where he rose quickly through the ranks from convittore to become, on Alessandro Scarlattis death in 1725, pro-vice-maestro to the Neapolitan royal chapel. His first operatic works were commedie per musica in local dialect, but from late 1722 he concentrated his talents on the more prestigious (and exportable) serious opera of the dramma per musica: most of his surviving operas are of this type, many in close collaboration with the librettist Pietro Metastasio. Vinci died suddenly in May 1730 in his mid-30s, rumoured to have been poisoned by a jealous husband.

Fagiolis programme, drawn exclusively from the serious operas, brilliantly illustrates the sheer variety of Vincis expressive range, as well as his own formidable musical versatility. He opens with two arias from Il trionfo di Camilla (1725) originally sung by the celebrated soprano Faustina Bordoni as the titular queen. The first of these, Sembro quellusignolo, has a distinctly Handelian cut, while the second, Più non so finger sdegni, is cast in gently pastoral hues with the sort of direct melodic appeal for which Vinci was famed. After a despairing recitative, Vitiges aria Sorge talora fosca laurora from LErnelinda (1726) shows a similar melodic gift, allowing the soloist opportunity for the ornately decorated style known as canto fiorito (literally florid song).

Gelido in ogni vena from Siroe re di Persia (1726) was originally assigned to the tenor character of King Cosroe, but in one source it is written in the soprano clef, raising the possibility that it may have been sung on occasion by a castrato. In any event, this aria is a masterpiece of self-examination as the kings blood runs like ice at the thought of his dead son; and Fagiolis ornamentation on the reprise, exploiting a wide vocal range, has one musing that this should be as well-known as many more celebrated arias by Handel and Vivaldi.

The first of two arias from Gismondo re di Polonia (1727), Quellusignolo chè innamorato, features a pair of delightfully trilling sopranino recorders evoking the song of the nightingale, with Fagioli matching them at every turn in ornamental dexterity while also uncovering the deeper reflectiveness of the text. The angular dotted rhythms and minor mode of Barbara mi schernisci from La Rosmira Fedele (1725) make for a stark contrast, followed by the rasping horns, turbulent strings and vocal acrobatics of the storm aria from Gismondo, Nave altera, che in mezzo allonde.

Two further delectable arias from LErnelinda follow, the infectious Sullali del suo amor (On the wings of love) being a particular highlight, with strings playing sul ponticello to evoke in striking terms the poison of contentment in its central section. Trumpets and drums make a welcome appearance in the imperious Vil trofeo dun alma imbelle from Alessandro nellIndie (1730) as Alexander the Great declares that I did not journey as far as the Ganges to conquer defenceless maidens.

This fascinating disc concludes with two arias from Il Medo (1728), originally sung by the great Farinelli as Giasone. The first, Scherzo dellonda instabile, is another storm aria with vocal pyrotechnics to match, while in the second Jason reveals the torment of his heart torn between two women, unaware that they are one and the same (Medea). On the surface the latter is gently unassuming music, but with an evocative obbligato oboe, thrumming strings, and Fagioli at his deeply touching best, this proves to be an exceptionally affecting note on which to end.

Vincis operas are still rare enough on disc that this album will hold delights even for operatic cognoscenti. But it also vividly demonstrates that the tragically short-lived Vinci deserves a place alongside the great operatic geniuses of the Baroque era. Fagiolis matchless artistry, underpinned by gloriously stylish and full-toned playing from the musicians of Il Pomo dOro, makes this a hugely attractive release for opera lovers and Baroque music fans everywhere. The dry but sympathetic recording made in Villa San Fermo, Lonigo, has the atmosphere of a medium-sized theatre, and there are expert notes from Roberto Scoccimarro.