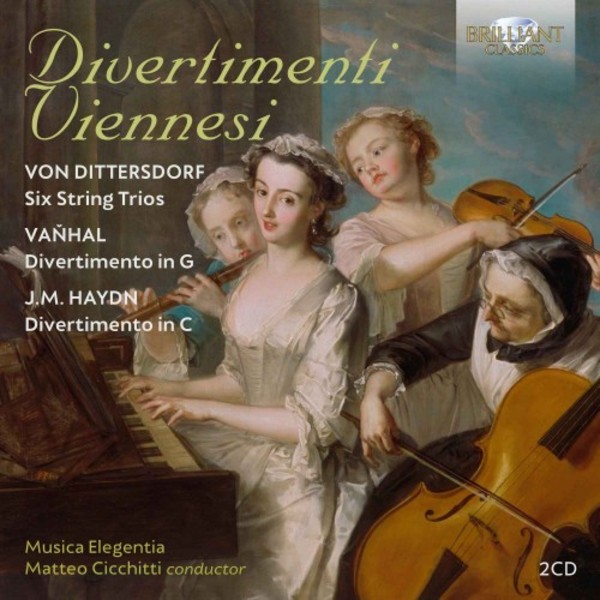 All three composers gathered together on this unique compilation were active in Vienna in the last half of the 18th century, and all had mastered the craft of writing music for pleasure  as much in the playing as the listening  rather than devotion or edification. They were also expert string players  Dittersdorf and Vanhal formed the other two members of a famous composers quartet that included Joseph Haydn (younger brother to Michael) and Mozart  and so wrote these divertimentos from the inside, as it were.

The Divertimenti included in the CD were composed in the 1760s. They are all fairly brief, multi-movement pieces, easy on the ear and of fairly simple construction, with the first violin taking the lions share of the  melody. However, a little closer listening will reveal many small refinements in the secondary parts (viola and violone), which not only support the main part, but interact with it in lively musical conversation: an inter instrumental dialogue which is particularly emphasised in this recording.

Michael Haydns C major Divertimento P.110 has the most conventional, four-movement structure, whereas Vanhals symmetrical design encloses a lovely Adagio within a pair of minuets, a free-flowing first movement and a syncopated finale bristling with energy and high spirits. The six trios by Dittersdorf are all two-movement pieces, pairing a quick introduction with a gentler minuet. The common but unusual element to the scoring of all the music on this album is the absence of cello in the basso continuo role, which is written down the octave to be played by a violone or double bass. This often creates a gruff or humorous character  especially in Michael Haydns Divertimento  but Vanhal in particular requires a musician of agility to zip up and down the instrument and writes for it as a deeper cello.

Founded by Matteo Cicchitti in 2012, Musica Elegentia is an Italian early-music group specialising in Baroque and early-Classical repertoire, with residences and appearances at many distinguished Italian festivals to its credit.

This brand new recording presents Divertimenti by Viennese composers: Karl Ditters von Dittersdorf, Johann Michael Haydn and Jan Kritel Vanhal. They are for 2 violins (or violin and viola) and violone, a bass member of the string family. The music indeed is pleasing, entertaining, brilliant, reminiscent of high class conversation.

Before roughly 1780 the term Divertimento was used for all kinds of instrumental ensemble music (Haydns String Quartets op.20 were called Divertimenti). Only after 1780 the term described music of an altogether lighter character, aimed at pleasing rather than challenging the audience. Divertimenti were in high demand by the upcoming bourgeoisie for domestic use.