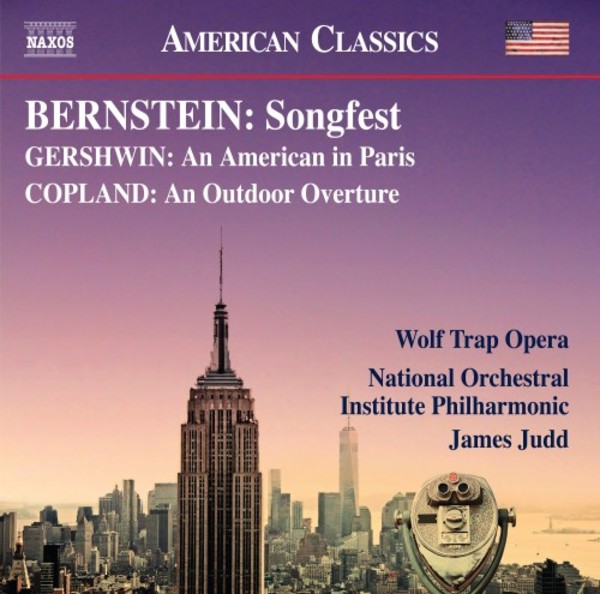 Songfest: A Cycle of American Poems for Six Singers and Orchestra

Songfest: A Cycle of American Poems for Six Singers and Orchestra

An American in Paris is one of Gershwins most vivacious works, an orchestral ballet saturated in homesickness and the blues. This recording, however, uses the new 2019 critical edition and offers Gershwins original orchestration, unheard for 75 years  leaner, more angular and transparent, it also employs the correct use of the iconic taxi horns, for a new sonic experience. The breezy vitality of Coplands An Outdoor Overture is balanced by Bernsteins Songfest  written to celebrate the Bicentennial Year in America, setting the verses of 13 of the countrys poets.

The ongoing series of American orchestral works presented by the National Orchestral Institute Philharmonic received critical acclaim, including a GRAMMY nomination in 2018 for their performance of Harbisons Fourth Symphony, Ruggles Sun-Treader and Stuckys Second Concerto for Orchestra, under David Alan Miller (8559836). AllMusic.com has commented that Miller draws out exciting and expressive playing from the orchestra and avoids the dry, academic approach of similar surveys. ★★★★

The NOIP plays magnificently, ★★★★★ wrote AudiophileAudition for their debut recording of Coriglianos First Symphony, Bright Blue Music by Michael Torke, and the Appalachian Spring Suite by Copland (8559782), while the second disc of Randall Thompsons Symphony no.2, Samuel Adams Drift and Providence and Barbers First Symphony (8559822) was well received by Pizzicato for their top notch performances. ★★★★★