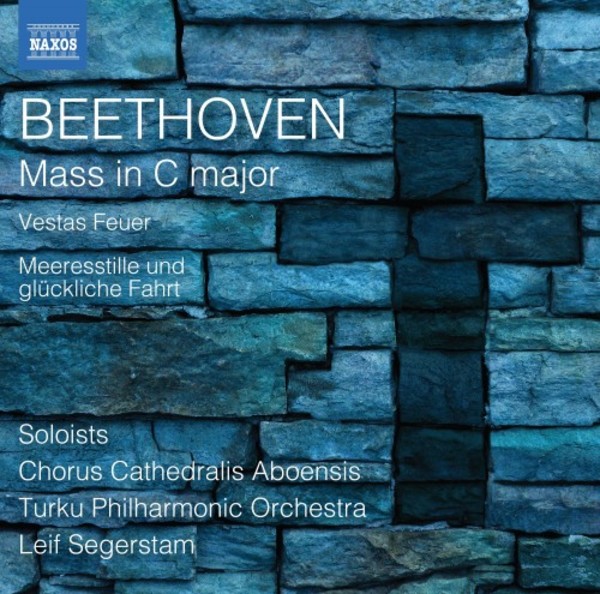 The custom of marking the name-day of Princess Esterházy with a newly-composed Mass began in the 1790s and for many years was carried out by Joseph Haydn. In 1807 Beethoven was commissioned and responded with his Mass in C major. Coolly received at court, it is a celebratory work of large-scale brilliance. The cantata Meeresstille und glückliche Fahrt is set to Goethes poems and contrasts calm with exuberance. In 1803 Beethoven set two numbers from Vestas Feuer, written by Emanuel Schikaneder, the librettist of Mozarts Die Zauberflöte.

This release joins our highly regarded ongoing series of vocal works by Beethoven recorded by conductor Leif Segerstam with the Turku Philharmonic Orchestra. Christus am Ölberge (8573852) appeared in June 2019, with acclaim from ClassicsToday.com: the Chorus Cathedralis Aboensis and Turku Philharmonic Orchestra sing and play handsomely. Ludwig Van Toronto also wrote that Leif Segerstam, the wild baton of Finnish music, finds just the right tempo for telling a dramatic Biblical story. The Turku Philharmonic and their local cathedral choir have both delicacy and heft, and the soloists are absolutely topdrawer Sensational music, brilliantly performed. ★★★★★

This team released their recording of Die Geschöpfe des Prometheus (The Creatures of Prometheus) on 8573853 in September 2019. This was an ICMA nominee, the American Record Guide writing that it shows great strength with lots of dynamic contrast and ClassicsToday.com wrote of Segerstams loving handling of phrasing.