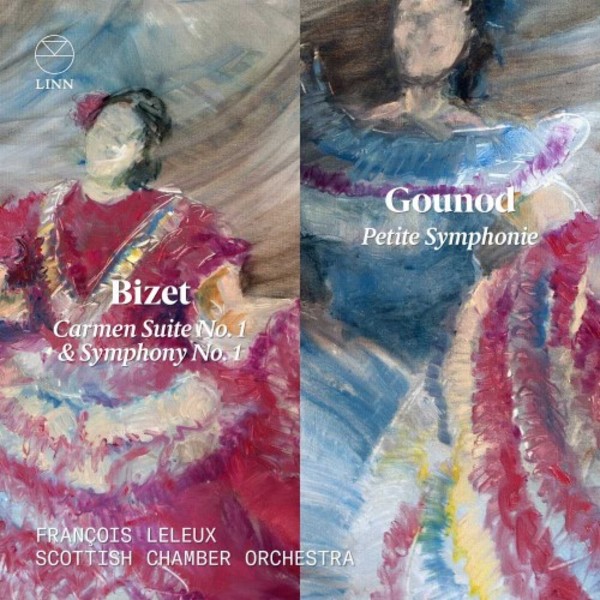 In his debut recording with the Scottish Chamber Orchestra, oboist François Leleux celebrates his dual roles of conductor and soloist as he directs performances of Bizet and Gounod. Following several successful collaborations, including a season as a Featured Artist, Leleux has established a strong rapport with the SCO.

The programme features Bizets Symphony in C major, written in a few weeks when the French composer was just seventeen, which is simply full of life, exuding brilliance, charm, wit and wonderful tunes. The Scotsman described his interpretation as brisk, urgent, full of bite, and as playful as you could ever want it to be.

Leleux is particularly suited to performing Gounods Petite Symphonie which is full of appealing melodies; the popular work has served as a model for French wind writing ever since its composition. Directing from the oboe Leleux joins the SCO section principals as they demonstrate the strength of their chamber music instincts in a performance which sparkles with personality and individuality. To complete the programme Leleux takes listeners to the opera with a suite from Bizets Carmen, which is bursting with the drama, passion and entrancing melodies that set this iconic opera apart.

François Leleux  conductor, leader and oboist  is renowned for his irrepressible energy and exuberance. As a conductor, Leleux continues to expand his successful collaboration with the Scottish Chamber Orchestra and was recently announced as Artistic Partner of Camerata Salzburg. Leleux also maintains close relationships with Chamber Orchestra of Europe and Saint Paul Chamber Orchestra.

As an oboist, Leleux is a remarkably charismatic, flamboyant performer, matching immaculate technique with a dazzlingly vivid identification with his music. Those qualities continue in his conducting  detailed, demanding, but full of such abundant enthusiasm that youre swept up in it from the first moment.  The Scotsman

Gounod submitted his Petite Symphonie for nine of the finest wind players in Paris to play, performed here with style led by Leleuxs sweet toned oboe. The extraordinary sound world was compelling.  BachTrack

Heres a timely release thats sure to lift the spirits. Oboist François Leleux conducts the Scottish Chamber Orchestra in a delightful programme of French music that oozes Gallic charm and refinement. At its centre is Gounods lovely Petite Symphonie, scored for wind nonet (flute plus pairs of oboes, clarinets, bassoons and horns). First performed in April 1885 by Paul Taffanels Société de musique pour instruments à vent (with Taffanel himself no doubt taking the flute part), it was unpublished until 1904, and showcases the many strengths and characteristics of the French woodwind tradition. After a sombre slow introduction, the work soon opens up into a world of utter magic, with a first movement Allegro animated by bustling bassoons, clarinets and oboes doing much of the motivic work, and the flute adding a distinctive glow on top of the Mozartian Harmoniemusik. An elegant flute melody leads the Andante slow movement, while the horns lend a strong hunting flavour to the Scherzo, and theres a Mendelssohnian lightness to the second section before a more relaxed Trio. The punchy Allegretto Finale introduces some fleeting darker tones, as well as entertainingly overlapping horns, and the work ends in the happy mood that has predominated throughout.

At just under 20 minutes in length, the Gounod is a real jewel, and it leaves one in no doubt as to the strengths of the SCOs formidable wind section, with special mentions for oboists Robin Williams and Rosie Staniforth, flute Silvia Careddu, and first clarinet Maximiliano Martín. No doubt Leleux brought his own wide experience to bear on this beautifully shaped and paced performance, which is a real winner from first note to last.

Gounod was a huge influence on Georges Bizet, and its fitting that two of Bizets most popular works should frame the Petite Symphonie. Proceedings open with an atmospheric account of the first Carmen Suite, arranged (after the composers tragically early demise in 1875) by Ernest Guiraud. It includes some of the operas most engaging numbers, including the Act III Aragonaise, the Act II Intermezzo and the Act I Séguidille, finishing off with a good dose of the Overture including the ever-popular Toreador song. There are more turbo-charged performances of this Suite on disc, but the SCOs performance has the advantage of a scale that seems far more in keeping with the musics theatrical origins, and once again Leleuxs experienced, charismatic guidance secures a performance that feels thoroughly idiomatic.

The disc ends with a dazzling performance of Bizets Symphony in C. A student work with the palpable influence of the Viennese classics, Rossini and Mendelssohn, this precocious piece languished in obscurity until brought to public notice by Felix Weingartner and published in 1935 at his own experience. Thanks largely to its championing by Beecham, it was a concert staple in the postwar years, but Leleuxs breezy, fresh-spirited performance demonstrates that theres still plenty of life in it. He coaxes from the SCO an energetic, buoyant account of the first movement, a dreamy Adagio with hints of southern climes, an exuberant Scherzo complete with rustic Trio section, and to round things off a witty, helter-skelter Allegro vivace that keeps the violins and upper wind in particular on their toes. Brass are ideally balanced to add punch without dominating, and theres some lovely string portamento to add extra charm.

Musicians so often lift our lives away from everyday cares: now more than ever, with so many arts organisations on indefinite hold, they need our support. So do yourself and them a favour, and hear this splendidly pert, enlivening disc, excellently recorded in Dundees Caird Hall by Linn. It should bring a smile to even the dourest countenance.

Leleux leads the SCOs crack wind soloists in a sprightly account of the Gounod and has a delicious way with the Bizet pieces: few recorded performances have delivered such an ideal balance between winds and strings, and such Terpsichorean joie de vivre.  Hugh Canning (Album of the Week)
The Sunday Times 23 February 2020

a suitably exuberant and boisterous performance, characterised by perky woodwinds (with an especially eloquent principal oboe making the most of his extended solo in the slow movement) and supple, athletic strings, particularly good in the bouncy Mendelssohnian finale  Not to be overlooked
Daily Mail

The Symphony in C sounds marvellously fresh and new-minted here. Leleux carefully calibrates the balance between energy and grace, so that everything seems perfectly proportioned and nothing is rushed or heavy-footed.  Leleux plays first oboe in the Gounod, meanwhile, where one notes his familiar beauty of tone and sensitivity of phrasing. Hes very much part of an ensemble of equals, though: theres a real sense of give and take among the instrumentalists here, in a performance of fastidious elegance and, once again, great refinement.  A hugely enjoyable disc.  Tim Ashley
Gramophone June 2020

The SCO have a thrilling way with Bizet  [The Symphony in C] bubbles along with infectious delight in the SCOs hands  I could listen to them playing this all day  dazzling between wind and strings, the former evocatively bucolic in the Allegro Vivace Trio, the latter nimble in the finale.  Sarah Urwin Jones (Orchestral Choice)
BBC Music Magazine June 2020

This is a delightful French feast... Leleux elicits a balanced variety of warmth and nimble lucidness from the Scottish Chamber Orchestra, either in the sweet intimacy of the Intermezzo or the rousing tutti of Les toréadors. ... Leleuxs reading is graceful yet thrilling, thoughtful but not without its pleasurable frissons.
The Scotsman