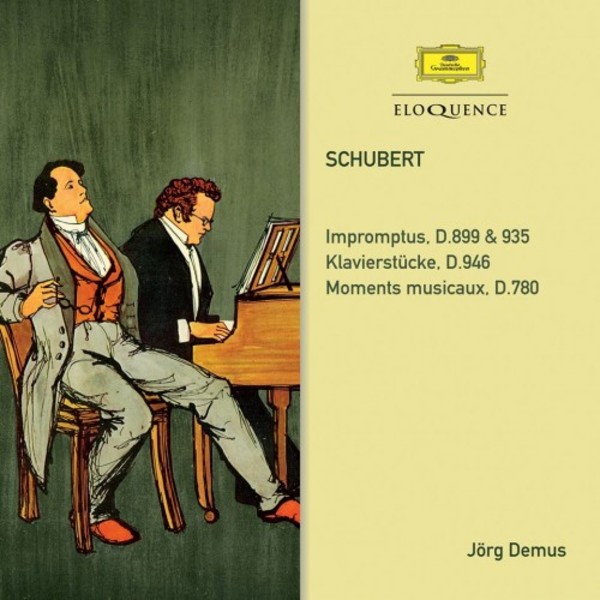 In tribute to the life and art of the Viennese pianist Jörg Demus, who died in April 2019, Eloquence releases his earliest recordings of Schuberts Impromptus and Moments musicaux.

By the time of these sessions, which took place over a week in April 1958, Demus was not yet 30 but already an experienced recording artist, having made LPs of the duet music for Westminster with his Viennese colleague Paul Badura-Skoda, as well as a Remington Records disc of the Moments musicaux and much else besides, focusing on the Austro-German repertoire of the Classical and early-Romantic eras which would make his reputation.

The Deutsche Grammophon engineers captured Demus more lucidly and favourably than their rivals, and in both mono and stereo incarnations these records would stand the test of time, though they have never been reissued as a complete set on CD. Newly remastered from the original tapes, they reveal the depth of Demuss understanding in Schuberts music, an unfussy technique and a modesty which never seeks to impose pathos and profundity from without but which dances with a rare lightness of spirit.

Born and raised in Vienna, Demus understood this music as a precursor to the popular waltzes and polkas of the Strauss family. Only a complete realization and comprehension of the accompanimental rhythms - precise and yet with a slight touch of a personal accent - will in many cases create the right atmosphere. When he died in April 2019, one of the many affectionate Austrian obituaries referred to Demus as the ballet-master of ten fingers: a description that summed him up perfectly, as these recordings demonstrate.

I personally prefer his playing of Schubert to Giesekings. He senses the bigness of the C minor impromptu and the lyricism of the G flat, he glitters in the G flat and he plays the simple ones with delightful simplicity ... The famous B flat Impromptu is for once played at the speed Schubert asks for ... and the effect is enchanting. - Gramophone, June 1959

None of this music attempts to be monumental. This, however, in no way lessens its charm. Demus seems to have genuine affinity for these masterpieces of Schubertian lyricism, and very pleasant listening is the result. - Stereo Review, June 1959