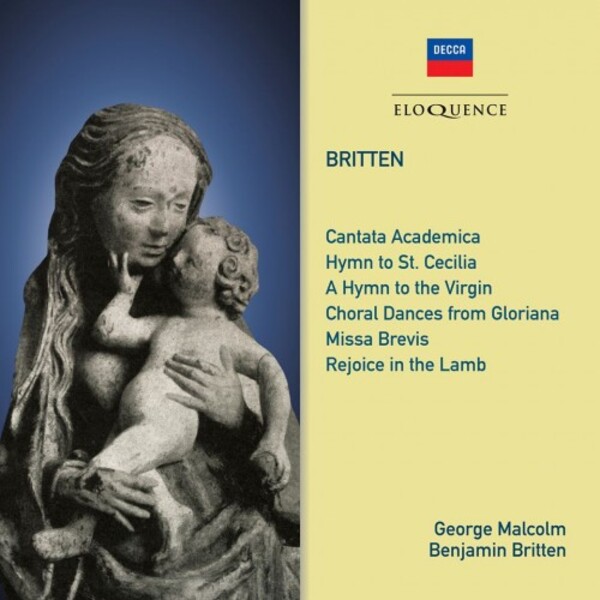 The first recordings of choral masterpieces by Britten, performed by the dedicatees and newly reissued in a unique compilation. At Christmas in 1958, Benjamin Britten went to hear the boys of the Westminster Cathedral Choir sing his Ceremony of Carols conducted by George Malcolm.

He was so impressed by their voices that he wanted to write something for them. Malcolm suggested a short Mass for boys voices. The result is the Missa Brevis, composed, performed and recorded by Decca on the occasion of Malcolms retirement as organist and choirmaster in July 1959.

During the previous decade, Malcolm had reformed the choir following a heritage of excellence established by his predecessor, Sir Richard Terry, while expanding the repertory, commissioning modern works from composers such as Britten and moulding the choral sound in the Continental style, learnt from his own Catholic training, which places much more emphasis than the Anglican tradition on chest voice. He created a natural and throaty Continental sound - the sound boys make in the playground, as he put it - that suited the great Catholic polyphony choir, much emulated by other English choirs in succeeding generations. Eighteen months earlier, Malcolm had also played the organ for the composers own recording of Rejoice in the Lamb, which sets portions of a poem by Christopher Smart extolling the praise of God in terms as touching and quirky as the text. In 1961 he took charge of the first performance at the Royal Festival Hall of the Cantata Academica, another celebratory work written to honour the quincentenary of Basle University, and made this recording for LOiseau-Lyre soon afterwards. Here too is a geniality and variety of colour and a wealth of melodic invention, in no way compromised by the use of a twelve-note serial theme.

Side B of the LOiseau-Lyre album reinforced Brittens remarkable skill as a writer for unaccompanied chorus, with the Hymns to the Virgin and to St Cecilia, smaller-scale works but even more perfect in their way, and then the more recent Choral Dances in Elizabethan style from his Coronation opera Gloriana; Britten shared with Stravinsky an ability to recreate the past in terms of the present without any sense of pastiche or loss of individuality.

The voices of the treble soloists in this first performance... were of superlative quality, underpinned by a striking level of self-assurance which no subsequent recording has quite equalled. - Musical Times, February 1998 (Missa Brevis)

The composer extracts a first-rate performance from his forces, and a special word of praise is due to the boy soprano, Michael Hartnett. - Gramophone, May 1958 (Rejoice in the Lamb)

More than anything this is a work of joy, and how remarkable it is that any musician can reflect the world of today (Britten is no escapist) in such terms of optimism ... The chorus is splendidly incisive under George Malcolms direction, and the soloists are admirable in every way. - Musical Times, December 1961 (Cantata academica)

Performances are of the best, as is the recording throughout. - High Fidelity, May 1962 (Cantata Academica, Hymns, Choral Dances)