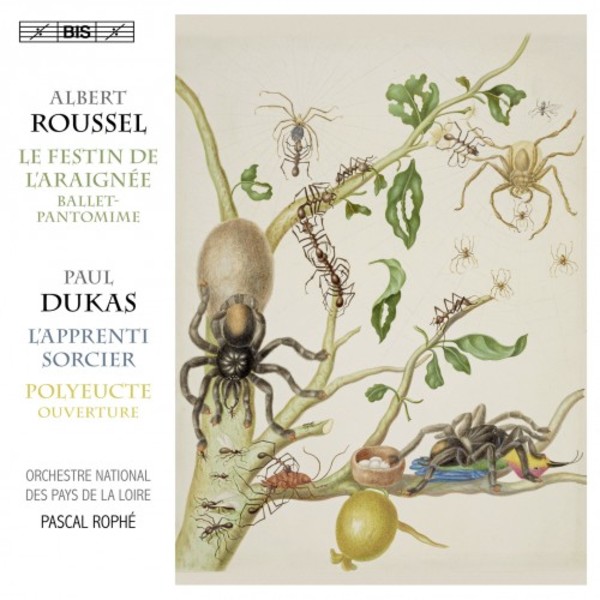 Under its music director Pascal Rophé, lOrchestre National des Pays de la Loire (ONPL) here performs two great orchestral spectaculars of French music  scintillating and imaginative scores composed only 15 years apart. A perennial favourite, Paul Dukass symphonic poem The Sorcerers Apprentice (1897) became a hit with the general public after being included in the soundtrack of the Disney animation film Fantasia in 1940. In the work, based on a ballad by Goethe, Dukas displayed an extraordinary command of the large late-Romantic orchestra as he depicted the disastrous consequences when a young apprentice tries to work the magic charms of his master.

In 1912, when Albert Roussel composed his ballet score The Spiders Feast, he was rather influenced by Impressionism, but his use of the orchestra was no less inventive than Dukas. The plot of the ballet is played out in a garden, where a spider is trapping various insects in its net, looking forward to having a sumptuous meal. Roussels sophisticated use of timbres and his characteristic rhythmic pointillism conjures a micro-drama which also features a mayfly, a team of ants and a rather terrifying pair of praying mantises. The disc opens with another piece by Dukas: Polyeucte, a concert overture inspired by a 17th-century play and a work of a surprising expressive power.

Arachnophobes beware! The latest disc from Pascal Rophé and his splendid Orchestre National des Pays de la Loire has as its centrepiece Albert Roussels ballet-pantomime Le Festin de lAraignée (The Spiders Feast), bookended by works by Roussels contemporary Paul Dukas. And it is indeed a feast, not just for the spider but for the listener too, with glorious orchestral playing, rich in detail and finely captured by the team at BIS records.

1913 was quite a year for ballet in the French capital: in the previous June, Ravels landmark ballet Daphnis et Chloé was premièred at the Théâtre des Champs-Elysêes by the Ballets russes to choreography by Diaghilev. On 15 May 1913 the same team delivered Debussys revolutionary poème dansé Jeux, which two weeks later was completely eclipsed by their riotous première of Stravinskys Le Sacre du printemps (The Rite of Spring). This gives some context to The Spiders Feast, which was first performed on 3 April 1913 at the less illustrious Théâtre des Arts, to choreography by Léo Staats. This half-hour work may not be in quite the same league as Ravel, Debussy or Stravinsky, but in its unerring command of impressionistic style and its captivating sequence of vignettes (portraying the underside of natural life in a surprisingly eventful and exotic garden) it is consistently engaging.

Alongside the spider, the ballet features ants, dung beetles, a delightfully delicate and flighty butterfly (soon ensnared by the spider), fruit worms, a pair of warrior-like praying mantises and a mayfly. The mantises, eluded by the worms, are in turn captured by the spider, but one of the mantises is freed by the dung beetles and kills the spider, whose death throes are graphically evoked in Roussels music. The work closes with an intensely felt funeral cortège for the mayfly, its brief lifespan over in less than a day, before a return to the peaceful atmosphere of the opening.

Rophé and his players give us a fabulously detailed yet atmospheric account of this entertaining score, moving from tranquility to eventfulness and violence in carefully judged gradations. Highlights include the busy Entrance of the Ants, an oriental-tinged Entrance of the Dung Beetles, a wonderfully imposing Entrance of the Praying Mantises, and an equally terrifying reprise of the Spiders Dance. It is the Hatching and Dance of the Mayfly that is the expressive heart of the work, however, and it is played with all the subtlety one associates with the Loire players under Rophé. Woodwind soloists and gorgeously sonorous yet never cloying strings are among this performances many strengths, and the brass and percussion make their mark where required too. Those familiar only with symphonic fragments sometimes heard in the concert hall shouldnt hesitate to get to know this ballet in its complete form, and could not do better than this new recording.

The Dukas works make for an exceptionally attractive coupling. Opening the disc is the 1891 Overture to Corneilles tragedy Polyeucte. Composed when Dukas was just 27, and influenced by Franck as well as Wagner and even Beethovens Coriolan, it is a work of surprising power, noble in bearing but with an Allegro section of gripping intensity. Just as The Spiders Feast is unmistakably a work of the early twentieth century, so Polyeucte is manifestly a product of the late nineteenth, and Rophé and his players give a performance of tremendous commitment, with meltingly lyrical string and woodwind playing and biting brass.

Far more familiar is the closing work, the ever-popular orchestral scherzo LApprenti Sorcier (The Sorcerers Apprentice, 1897). Here the Loire players treat us to an account that is both more immediate and more closely atmospheric than some might expect. Expertly paced by Rophé, the score reveals details that sometimes prove more elusive, such as the brilliantly shimmering percussion of the central tutti section, while the magically layered textures of the opening pages (including a striking foretaste of Debussys Jeux) are superbly done. The all-important bassoons are really on their mettle here (are they French or German instruments, we wonder), and this is a performance that perfectly captures the works atmosphere and narrative flow while allowing one to marvel at the phenomenal skill of Dukass scoring. For lovers of French music at the turn-of-the-century, this disc is an essential acquisition.

... even in the most rhythmically involved and intricately scored passages of The Sorcerers Apprentice, every last detail is crystal clear ... Listen, say, to the crazily glittering swirls starting at 9'34", where instead of the usual wash of sound one really can hear every note  its exquisite. ... The Spiders Feast is similarly pellucid, revealing all the wonderfully elaborate strands and layers of its piquant scoring.  Andrew Farach-Colton
Gramophone March 2020