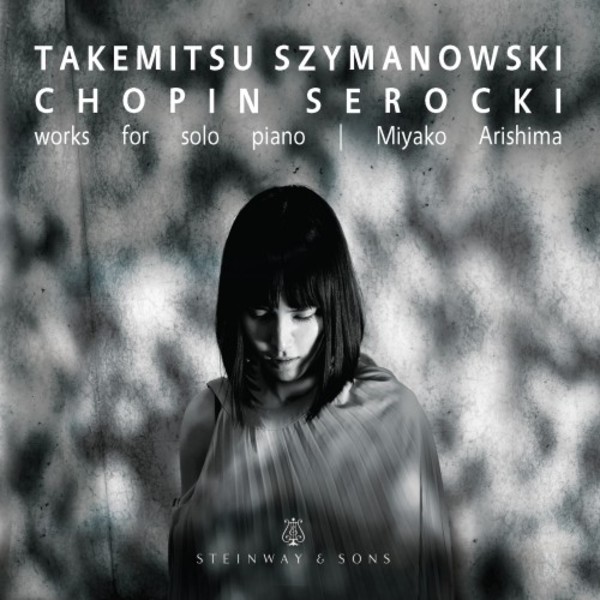 Steinway & Sons releases the debut album from up-and-coming Japanese pianist Miyako Arishima. The album blends two vastly different, yet kindred worlds: the Romantic, embodied by the music of Frédéric Chopin, and the twentieth century, represented by the works of Toru Takemitsu, Karol Szymanowski, and Kazimierz Serocki.

Although the record heavily features Polish repertoire, Rain Tree Sketch by Toru Takemitsu, arguably the greatest Japanese composer of the twentieth century, kicks off the album. This piece, written in 1982, reflects the essence of Takemitsus composition style, blending Western themes with Japanese cultural roots. Although the piece is short, it focuses on the relationship between meticulously produced notes and silence.

There are two pieces by Polish composer Karol Szymanowski featured on this record: Métopes, op.29: Nausicaa, and 2 Mazurkas, op.62. The first of the two, Nausicaa, was written while the composer was under the sway of aesthetic impressions from Doric temple friezes at the Palermo museum, and as a result was heavily inspired by Greek mythology. The second, 2 Mazurkas, are later works which form the final opus of Szymanowski, and are distinct from the composers earlier works in their softer rhythmic contours and distinct arabesque character.

Three works by Frédéric Chopin, including 4 Mazurkas, op.33, the sixth of the composers mazurka sets, showcases the signature liveliness of the mazurka, a traditional Polish dance set in triple time, through nostalgic, popular melodies and elaborate minor-mode settings.

Rounding out the recording is the seven-part Suite of Preludes by Kazimierz Serocki, who would later become a radical representative of the Polish avant-garde. This piece is notable for its unorthodox incorporation of Arnold Schoenbergs famous twelve-tone serialism, and its blend of the Chopin-era and post-Chopin musical traditions.

Born in Hitoyoshi City, Kumamoto Prefecture, Mikyako Arishima started playing the piano from the age of two. After graduating from Toho Womens High School Music Department, Arishima studied at the Bydgoszcz Conservatory in Poland where she completed her undergraduate and master's degrees. In 2013, she won the Music Festival Award at the 3rd Kirishima International Music Festival, and in the same year won the 5th place at the 10th Darmstadt International Chopin Piano Competition. Arishima has performed with the Kyushu Symphony Orchestra, Sendai Philharmonic Orchestra, Krakow Chamber Orchestra, Bydgoszcz Philharmonic Orchestra and others.