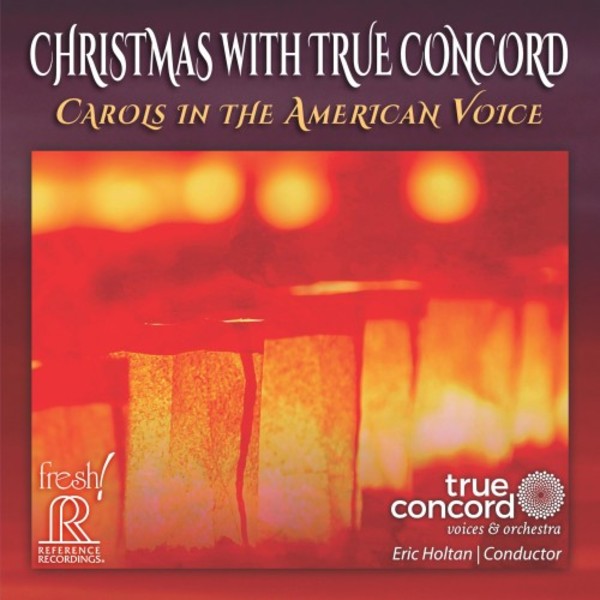 Christmas with True Concord: Carols in the American Voice

Eric Holtan, founder and conductor of True Concord Voices and Orchestra, states: Every December, True Concord presents its popular Lessons and Carols by Candlelight concerts in the Tucson area. Unique in the local milieu of seasonal offerings, the focus is on sacred Christmas carols. Even in their simplest form, carols evoke emotionally powerful memories of personal and family experiences that enrich and enliven annual holiday celebrations. With this album, I wanted to capture the essence of our muchloved concerts with the mostly familiar carols presented here, but in musical settings by American composers that are new or not widely known. With the kind assistance of advisor Dale Warland  who set the standard of excellence with several cherished Christmas recordings over the years by The Dale Warland Singers  True Concord offers these holiday treasures, most of which are receiving their world premiere recordings. This is Christmas With True Concord  Carols in the American Voice.

Founded in 2004, Tucson, Arizona-based True Concord made its New York City debut at Lincoln Centers Alice Tully Hall in September 2015 with Mozarts Requiem and Stephen Pauluss Prayers and Remembrances. That same year, True Concord made its internationally-distributed debut album on Reference Recordings, Far in the Heavens: Choral Music of Stephen Paulus, for which it received a Grammy nomination for Best Choral Performance, and for which Stephen Paulus won posthumously the Grammy for Best Classical Contemporary Composition. RR is proud to present True Concords second album, recorded in outstanding fidelity by engineer John Polito, and produced by Grammy-award winner Peter Rutenberg of Los Angeles.

Reference Recordings, founded in 1976, is based in San Francisco, with multiple Grammy awards and nominations, and a catalogue that includes numerous American and international orchestras, ensembles and choruses. FRESH! is part of Reference Recordings mission to encourage unique and fine artists, and give them a strong platform for promotion and sales nationally and internationally.