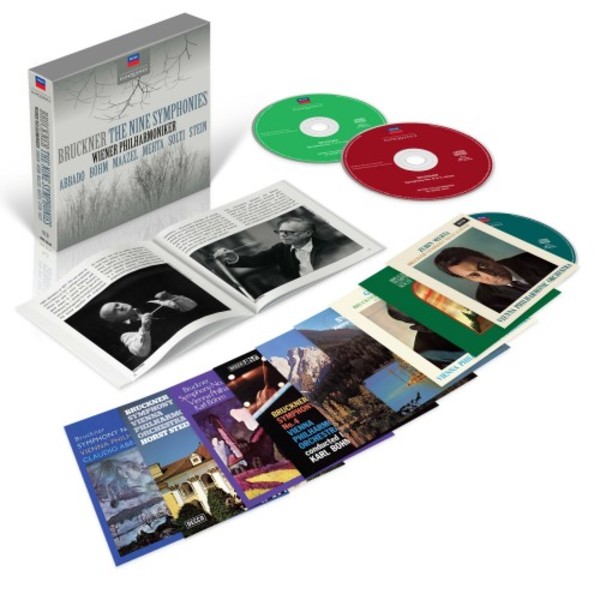 The Vienna Philharmonics distinguished Bruckner tradition, documented through a series of superb Decca recordings from the 1960s and 70s on a Limited Edition 9-CD box set, with Original Jackets. This Decca Vienna Philharmonic Bruckner cycle was a huge commercial success when released as a CD set in Japan. It has only otherwise been available within a 65-CD box, and this Eloquence issue marks its first international release.

Founded in 1842, the Vienna Philharmonic gave a notoriously dusty reception to Bruckners Third when they played through it in rehearsal in 1874 and refused to perform it in concert. Three years later the composer conducted them in the premiere of the symphonys revised version; though the occasion was a fiasco, it earned Bruckner the lifelong admiration of Gustav Mahler, who was present as a student. The orchestra is now proud to present Bruckners symphonies all over the world, but No.1 was little known, at least outside Austria and Germany, when the young Claudio Abbado made this incandescent recording in 1969.

The set contains other notable firsts. The earliest recording here is of the Ninth, led in May 1965 by Zubin Mehta. Amazingly this was the conductors debut recording, yet it soon won critical praise for the patient build-up of tension, broadly sustained lines and sumptuous playing which are all quintessential attributes of a successful Bruckner performance. Led by Karl Böhm, the Third and Fourth symphonies have long been recognised as classics of the gramophone, but the Vienna Philharmonic Bruckner cycle also contains several less-familiar recordings.

There are dynamic accounts of the Second and Sixth led by Horst Stein, who was a Bayreuth regular in the 1970s, and accorded a heros welcome on his appearances in Japan, but otherwise known outside German-speaking lands principally for his Decca recordings. The Seventh and Eighth were placed in the dynamic hands of Sir Georg Solti, and his subsequent Chicago Symphony versions have unfairly overshadowed these more flowing, astutely paced Viennese recordings  made by the renowned Decca engineering team of John Culshaw and Gordon Parry. Usefully packaged with one symphony per disc, in order of the symphonys numbering, this is a set that no seasoned Brucknerian will want to be without, but it also makes an ideal introduction to the work of Romanticisms pre-eminent musical mystic.

Elegance, exquisite phrasing, beauty of string tone and lovely wind-playing, bite when needed and a real sense of commitment: all these qualities shine out from every disc.  Gramophone, December 2014

Böhm offers Bruckner as he is played in Vienna today with the Philharmonic showing us how to stretch a singing phrase effortlessly or build one of the composers galloping fanfare climaxes up and up to the final peak of intensity.  High Fidelity, December 1971 (No.3)