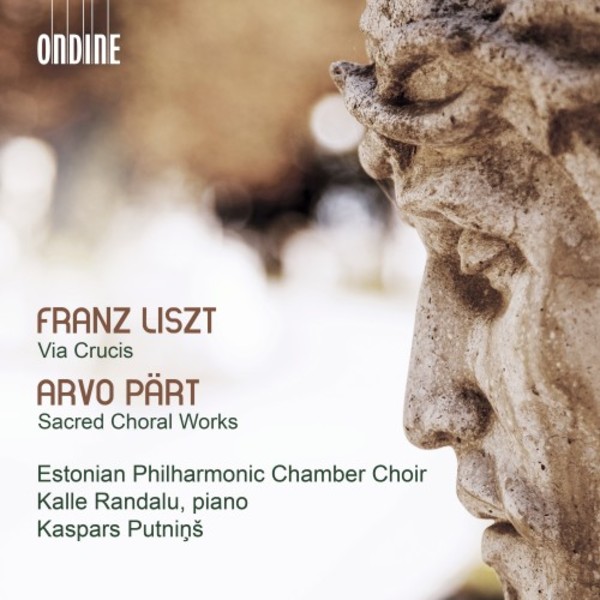 Solfeggio
Summa
The woman with the alabaster box
Zwei Beter

Solfeggio
Summa
The woman with the alabaster box
Zwei Beter

This release by the award-winning Estonian Philharmonic Chamber Choir under the direction of its artistic director and chief conductor Kaspars Putniņ includes Franz Liszts (18811886) mystery-filled religious vocal work Via Crucis as well as four enigmatic and spiritual choral works by Estonian composer Arvo Pärt (b. 1935).

Liszts Via Crucis is one of his religious masterpieces and represents his late modern and somewhat austere style. Liszt joined the Franciscan Order in Rome in 1865 and remained as a devout Catholic until the end of his life. Through the process Liszt became deeply interested in the Gregorian chant and the works of Palestrina. His stay in Rome inside the Vatican walls inspired him to write several religious works, including the Via Crucis. During Liszts lifetime, and even today, his religious works were somewhat neglected: Via Crucis was completed in 1879 but not premiered until 1929. The version in this recording is for choir and piano and features Kalle Randalu, one of Estonias internationally most well-known pianists.

This album also includes Arvo Pärts first choral work, Solfeggio, from the 1960s, which already looks towards his later style. Pärt has described his Summa from 1977 as his most strict and enigmatic work in his series of works in his now famous tintinnabuli style. The two other choral works are based on biblical narratives from the Gospels of Luke and Matthew.