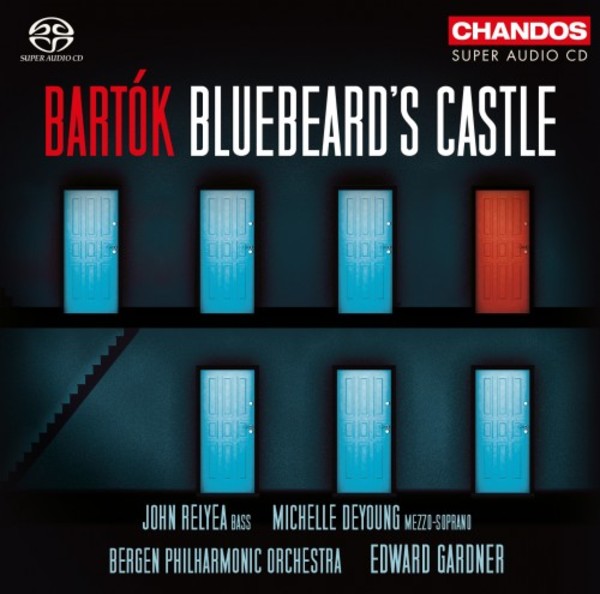 Following outstanding reviews for his interpretation of Duke Bluebeard around the world, notably at the Paris Opéra and then in Philadelphia and New York with Michelle DeYoung, John Relyea stars in the first studio SACD Surround Sound recording of Bartóks psychological thriller.

The two protagonists are joined by Edward Gardner and his Bergen Philharmonic Orchestra, and the Hungarian actor Pál Mácsai who delivers the Prologue, the work being sung in the original Hungarian.

Bartóks only opera, Bluebeards Castle was composed in 1911 and is based on a libretto by Béla Balázs (a room-mate of Kodály), which met Bartóks desire for a subject that was modern, but drawn from traditional culture.
Of their recent performance at Carnegie Hall, the critics said:
Ms. DeYoungs singing had radiant bloom and molten intensity, which conveyed Judiths youthful naïveté as well as her wilful determination.  New York Times

Relyea was superb,  with his  firm, deep and incisive voice, he delivered a thrilling portrayal that fully displayed Bluebeards transformation from laconic to impassioned.  Classical Source

Along with Debussys Pelléas et Mélisande and Bergs Wozzeck, Béla Bartóks Bluebeards Castle is one of the defining works of twentieth-century opera. While Puccini, Richard Strauss and even Janáček may be more widely performed, it is these three works that seem unerringly to put their finger on the deeper issues confronting humankind in the modern world, problems of identity, self, the subconscious and the individuals power (or lack of it) to control his/her destiny. Bartók's only opera, composed in 1911 during his early maturity but not performed until seven years later, had to wait until after World War II and its composers death to enter the wider repertoire, but since the 1950s its position as a modern masterpiece has been unchallenged. Cast in a single tightly-organised act, it is based on a play by Béla Balázs that was designed for musical setting, a potent combination of Maeterlinck-like French symbolism and the metaphysics of nineteenth-century German Romanticism. To this intriguing mixture Balázs and Bartók between them added a unique folk-infused Hungarian flavour that seeps into the musics every pore, even when performed in translation.

Over the years, Bluebeards Castle has proved astonishingly successful, not just on stage where its heady symbolism is a gift for most directors, but also in the concert hall and on disc, where Bartóks music rarely fails to fire the inner imagination of listeners. This new recording of the opera on Chandos is based on live performances given in the Grieghallen, Bergen, in November 2018 by the Bergen Philharmonic under Edward Gardner. As an opera conductor of long experience, Gardner paces the music superbly, and the Bergen orchestra, these days one of the worlds most successful recording ensembles, play their socks off, brilliantly captured in surround sound by the Chandos team of Brian Pidgeon and Ralph Couzens.

It helps, of course, that the operas two sung roles are taken by a pair of truly world-class artists. John Relyeas magnificently sonorous bass is perfect for the mysterious, secretive and world-weary Bluebeard, bringing his new bride to the castle that represents his soul: though resigned to his fate, he is capable of passionate outbursts, the intonation never faltering, the tone splendidly intense yet generous. Theres an inner calm to Relyeas singing that ensures (quite properly) that the outcome of this fable is never in doubt, even as the choices of the seven doors are laid before Judith. To the latter part, mezzo Michelle DeYoung brings years of experience, torn by her love to defy Bluebeards warnings and explore behind each of those doors. Other singers may have delivered a Judith of greater finesse, but few have ever matched DeYoungs thrilling sense of involvement, and the sense of excitement builds palpably until the operas closing pages when she, like the three wives before her, submits to her fate.

Though recorded at a slightly lower volume level than some rival versions, the gradual unfolding of the operas architecture is tremendously compelling. As the spoken prologue (delivered with all the clarity of a born storyteller by Pál Mácsai) gradually gives way to the first awakening of the orchestra, the listener already knows that this will be something special. And the Bergen Philharmonic really brings this castle to life: its mysterious sighing and weeping, the blood-soaked torture chmaber, the blood-flecked armoury, the glimmering treasury, the beautiful gardens, the vast expanse of Bluebeards kingdom (full orchestra underpinned by magnificent organ chords), and then the baleful stillness of the lake of tears, and finally the haunting appearance of his former wives. Although the operas outcome (as in all such fables) is inevitable, this performance has the listener hanging on every word, every bar of Bartóks uniquely powerful score, the intensity building through the final climax even to the subdued solitude of its closing pages. A century after its premiere, this opera still has the ability to speak to our subconscious as powerfully as ever, and it does so here for its full duration.