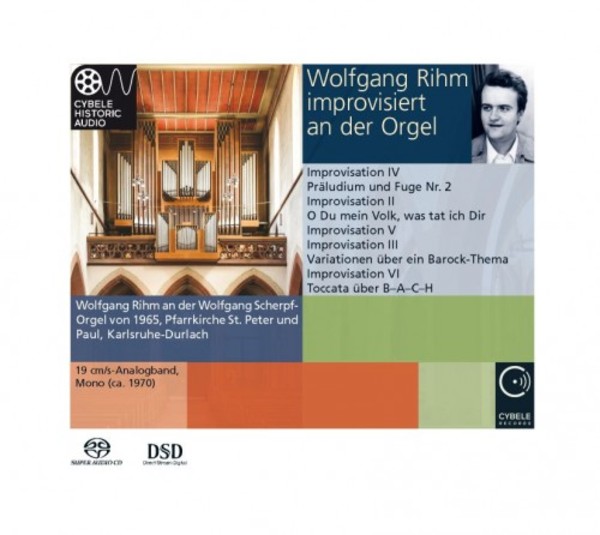 Wolfgang Rihm improvises at the Organ

Our new Cybele Historic Audio series presents valuable historical recordings to the public for the first time. These include analogue tapes, records and other recorded media, all digitised in the Cybele AV Studio in maximal 1-bit 2.8224 MHz DSD quality and thereafter given a thorough restoration, so that you can enjoy the recordings in pure lossless quality on SACD. www.cybele.de/historic-audio

Vol.1 of the series contains hitherto unpublished treasures (ca. 1970) of the composer Wolfgang Rihm (b. 1952), which were created around 1970 in Karlsruhe-Durlach with Rihm as an improviser on the organ.

What Wolfgang Rihm, by then a mature composer, once described in conversation as a principle of his writing, twisting toward something other, especially at the end of sections and compositions, traces its origins back to his early stage of development. Other defining qualities of his output are a constant aversion to obeying systems, an openness to spontaneity and an intuitive approach to finding and developing sounds and structures and bringing them in relation to each other. Add to the mix a strong penchant for extremes: overloaded tuttis, sounds of the utmost gentleness, highly-virtuosic passages, and dreamy-elegiac melodies, often juxtaposed in abrupt shifts.

The roots of these qualities date from his adolescence, when he was deeply preoccupied with the organ:

I composed a lot of organ music back then, from around 1966 to 1970. Many organ pieces, a few pious, most resoundingly free-form, childishly pompous. I also really liked playing the organ, of course never from a score but rather as though it belonged to me: it was magnificent. Sometimes I would let myself be locked in, and back then there were a few people who would vouch for me; I had the key to the church and finagled [Translators note: the original German verb has the double meaning of playing or hitting/striking, and Rihm adds that he means it literally, presumably more in the latter sense] the organ half the night... I all too easily had visions, such as being the reincarnation of Reger or the continuation of the French organ symphonists, and all sorts of notions. My playing around was thus always serious. The organ was my orchestra, too, since no one wanted to give me one at that time, which is normal... the organ always had something enjoyable for me, something totally wild.  Wolfgang Rihm

Wolfgang Rihm and the Organ