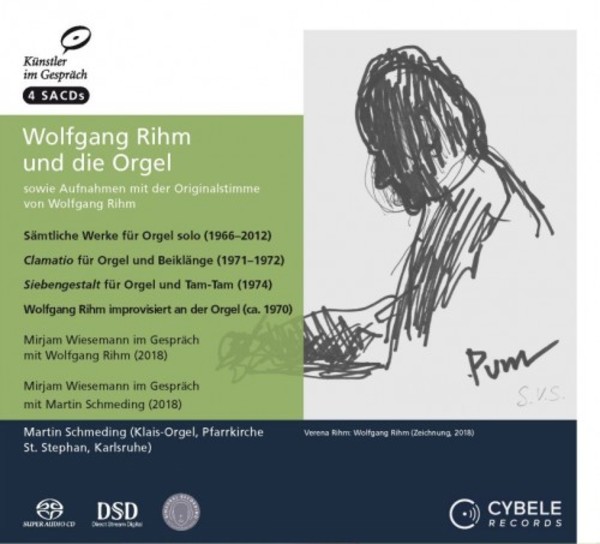 Wolfgang Rihm and the Organ

Wolfgang Rihm defies both classification and pigeonholing. As a person and especially as a composer. In Rihms conversation with Mirjam Wiesemann (SACD3) he states: You can call what I do whatever you will; it is not something tangible. Even I do not get it...

From day one, the point of departure for his creativity was taking delight in playing. Thus, in the 1960s, in his hometown of Karlsruhe, he started spending hours and hours at night, improvising on various organs; even then his creations were not born of the mind, but rather very sensual fruits.

While rehearsing with Martin Schmeding in the parish church of St. Stephan, Karlsruhe, in February 2018, he heard his youthful works for the first time in decades  sometimes even for the first time since writing them. A special moment for all.

The uncompromising and passionate going-all-out, giving-his-all and stretching-beyond-his-limits with a sheer overwhelming intensity and emotionality... It is a part of what makes the unmanageable abundance of his output so fascinating.

Its unwieldy nature also made it possible for Martin Schmeding, despite Wolfgang Rihms fame and the thorough amount of his music available on disc, to lift the lid on such an undiscovered treasure. Two-thirds of the organ works (SACD1SACD3) heard on our edition are first recordings.

Our anniversary production is rounded off with previously-unreleased improvisations by Rihm at the organ by Wolfgang Scherpf (Speyer) in the parish church St. Peter and Paul in Karlsruhe-Durlach (SACD 4). The 19 cm/s analogue tape recordings in mono were made by Wolfgang Rihm himself.

As Martin Schmeding says very meaningfully in his conversation with Mirjam Wiesemann (SACD4): Discovering terra incognita on the organ map is very beautiful!

Wolfgang Rihm improvises at the Organ