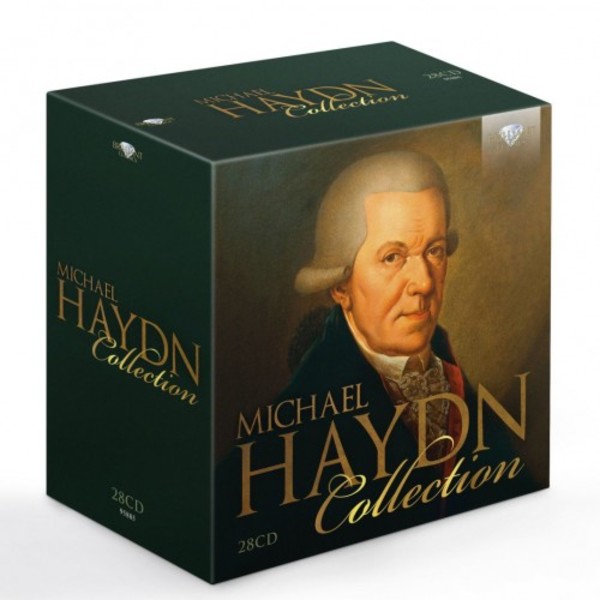 An inspiration to Mozart and a teacher to composers such as Diabelli and Weber, Johann Michael Haydn (1737-1806) was a respected and influential figure during his lifetime. Michael and his brother Joseph both boast a sublime musical output, but history has favoured the younger brother. Although Joseph was undoubtedly a rare genius, Michaels works merit equal recognition, and this set explores his diverse musical repertoire from the better-known sacred music to rare recordings of seldom heard works.

The collection opens with Michael Haydns symphonies. By the age of 25, he already held the prestigious position of court composer and Konzertmeister in Salzburg. The earliest symphonies included here, No.1 in C and No.1B in F, date from 1758 and display the youthful energy of a composer finding his feet. In comparison, the later symphonies demonstrate a greater understanding of the complexities of every instrument in the ensemble. His penultimate symphony, F major MH507, features an expressive Adagio ma non troppo where the composer gives the bassoon a lyrical melody line. Haydn also wrote concertos that gave prominence to under-represented instruments including the trombone and the clarinet, the latter of which had only been invented at the turn of the 18th century. Haydns varied and extensive output caught the eye of Mozart, 20 years his junior. He greatly admired Haydn and the two remained close friends until Haydns death in 1806.

Michael Haydn has suffered from musical misattributions, and many of the works in this set have only recently been correctly attributed. For example the G major Symphony MH334 was believed to have been Mozarts Symphony No.37 until 1907, when musicologist Lothar Perger discovered Mozart had only written the introduction. Scholarship has continued shedding light on Michael Haydns music, and an improvement on Pergers 1907 catalogue of the composers works is the recent one created by Charles Sherman and T. Donley Thomas in 1993, in which 838 pieces are each assigned an MH number according to the authors best guesses at chronology.

Michael Haydn also wrote serenades, divertimenti and notturni, genres popular during the Classical and Romantic eras, where a tuneful melody is prioritised over technical virtuosity. The D major Serenade MH86 has ten movements including a concertino for horn and trombone, which features uplifting solo lines.

Haydn wrote some 850 works during his lifetime, with sacred music constituting nearly half, but a few works in particular stand out. The Requiem, or Missa pro defuncto Archiepiscopo Sigismondo, is one of his most solemn compositions. It was written for the death of Archbishop Siegmund, but the grief and sorrow expressed in the music was also likely linked to the recent death of his only child in 1771, Aloysia Josepha. Meanwhile the Missa Sancti Francisci (St Francis Mass) is more lively, and there are fast movements of challenging violin semiquavers while the choir sing praise.

The Classical era witnessed an extraordinary musical outpouring across Europe. It has been dominated by the colossus of Mozart and Joseph Haydn, who have cast their shadow over many of their contemporaries. Michael Haydn is one of these composers who has been sorely overlooked, and this set goes a long way towards bringing the composer into the light.