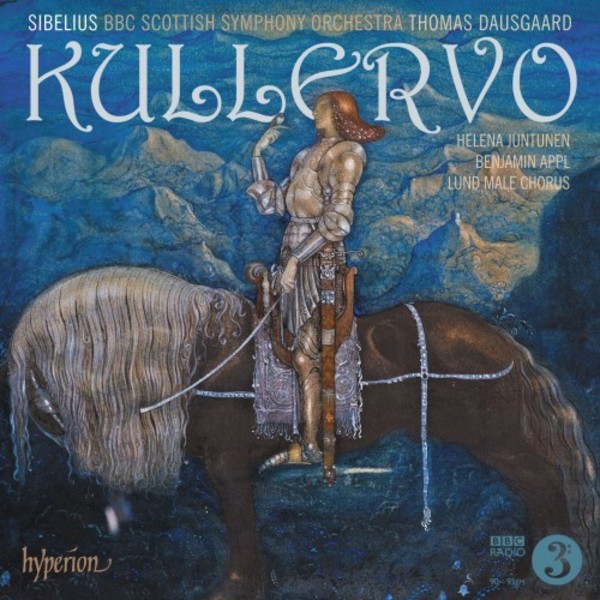 While Kullervo represents just the confident first step in Sibeliuss symphonic odyssey, it is also a viscerally exciting experience on its own terms  little wonder the first performance in 1892 was such a triumph for the young composer. An unmissable acquisition for anyone who knows only the numbered symphonies.

Often regarded as Sibeliuss first distinctively individual masterpiece, the five-movement symphony (or symphonic suite) Kullervo, op.7, was written when the composer was still only in his mid-twenties, fresh from studies in Vienna where he had absorbed the music of Wagner and Bruckner, among others. The Swedish-speaking Sibelius, enthused for all things Finnish by his fennomane fiancée Aino Järnefelt, threw himself into reading the national epic, the Kalevala. The particular episode he latched onto for his first foray in a palpably new national style was the story of the tragic anti-hero Kullervo, a magically gifted youth raised in slavery, who unwittingly rapes his own long-lost sister. After the revelation of their kinship, she commits suicide by hurling herself into swirling rapids, and Kullervo goes on a trail of murderous revenge before taking his own life with his blood-soaked sword. For this uncompromisingly grim but gripping work Sibelius used, in addition to full orchestra, a male-voice chorus and soprano and baritone soloists, largely eschewing conventional late-Romantic emotional gesturing while preserving an almost Wagnerian epic sweep and a Brucknerian thematic austerity.

Though notably successful at its April 1892 premiere, Kullervo received only four performances during Sibeliuss lifetime, the composer withdrawing it just a year later and only giving permission towards the end of his long life for its posthumous publication. Since its first commercial recording in 1970 (by the Bournemouth Symphony Orchestra under Paavo Berglund) it has been remarkably fortunate on disc, with conductors from Davis and Segerstam to Vänskä and Oramo championing its cause, and performers and audiences alike recognising its prophetically Sibelian qualities mixed with all the raw energy of youthful genius.

This new recording from the BBC Scottish Symphony Orchestra under their chief conductor Thomas Dausgaard captures that thrilling combination of brooding Nordic evocation with expressive edginess like few others. Right from the outset the BBC Scottish strings manage to pitch their tone ideally between folk-like earthiness and concert-hall refinement, while mellow horns and plangent double reeds give the opening character portrait a noble intensity. In the gently radiant lullaby that forms the works second movement (Kullervos youth), characterful woodwind are to the fore in the pastoral episodes. It is however the vast, 23-minute central movement (Kullervo and his sister) that marks this performance as one of real distinction. The Lund Male Chorus deliver the narration with chilling relish, as if the unfolding horror not merely eludes but almost fascinates them. Soprano Helena Juntunen uses all her operatic expertise to capture the vulnerable but fatally impassioned persona of Kullervos sister, compelling the listener to confront the characters fate in the starkest possible light. Baritone Benjamin Appl is outstanding as the eponymous careworn hero, bringing an heroic edge to his chilling brashness. Yet all the time, the listener is left in no doubt as to the inexorable pull of fate in this tragic tale, already foreshadowed in the opening movement.

Like so much of this music, the warlike Alla marcia fourth movement (Kullervo goes to war) has a Nordic elementalism to it, but also a bite that recalls Mahler at his most sardonic (another reminder of the shared Viennese milieu that unites these otherwise strongly contrasting composers) and a bright steeliness that brilliantly evokes the clash of weapons. The buoyancy of this battle-piece throws into sharp relief the palpable oppressiveness of the finale. Here the Lund chorus are again on peak form, now sounding more engaged by the raw emotion of the narrative as Kullervo returns to the scene of his crime against nature. Their lament is not just for the anti-hero but also, so it seems, for the fate of an entire nation, and Dausgaard captures the searing pain of the music without recourse to extreme broadening of tempi. Indeed, his speeds in general are superbly judged, lending the entire work a buoyancy and airiness entirely in keeping with the subject, yet with no loss of tragic weight.

Hyperions experienced recording team of Simon Eadon and Andrew Keener have done an outstanding job evoking the unique atmosphere of this landmark score in the space of the City Halls, Glasgow, and this disc now takes its place among the most urgently compelling accounts of Sibeliuss early masterpiece. Essential listening for those wanting to explore the composer beyond the conventional canon, and with presentation greatly enhanced by notes from Sibelius expert Daniel Grimley.

Dausgaard has the measure of this music, with its slow, tick-tocking, inextinguishable pulse... Theres a crackle of excitement every time he shifts up a gear and the orchestral cogs find their groove. ... Helena Juntunen sings the sister with poise and bite, and while Benjamin Appl may not be the kind of gravelly baritone you might expect for Kullervo, his lieder-singers control serves him well. At the end of the movement, he sounds genuinely, excitingly at the edge of his endurance, cursing his fate.  Erica Jeal
The Guardian 27 June 2019

Set down hard on the heels of an acclaimed concert performance in Glasgow during May 2018, Thomas Dausgaards new recording of Kullervo has lots in its favour. Not the least of its many virtues is the enthusiastic, scrupulously prepared and rhythmically spry contribution of the BBC Scottish SO (a shout-out to their crisply articulate strings and irresistibly vocal woodwinds in particular). Plaudits, too, for Dausgaards purposeful, keen-eared direction, some shrewdly chosen tempos ensuring that Sibeliuss daringly ambitious scheme unfolds with impressive cumulative power... All told, a hearty welcome to this fresh-faced newcomer.  Andrew Achenbach
Gramophone August 2019