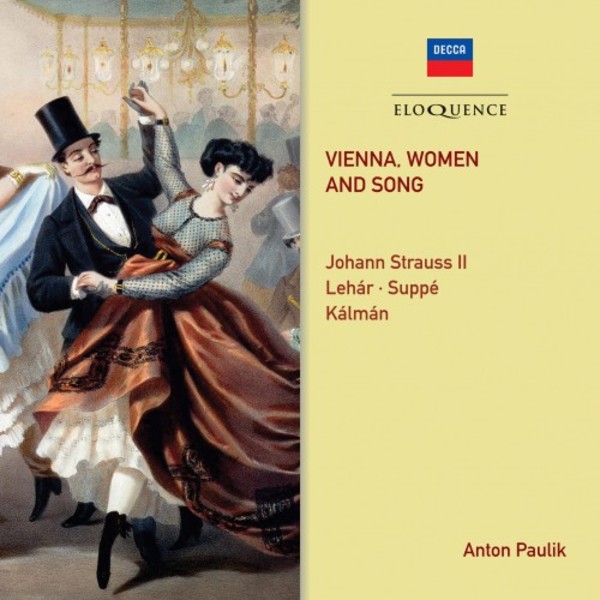 Born in Bratislava - Pressburg, as it was in 1901 - Anton Paulik became a reassuring presence for decades in the pit at the lighter Viennese lyric theatres, who could make the music of the Waltz King and his successors sparkle and swirl like few others. In charge at the Volksoper one night in summer 1969, Paulik was flawless and apparently ageless according to the critic for Opera, who got to the heart of the conductors gifts: he knows how to play operettas so that they were whistled in the streets from the premiere onwards, and he knows how to make them sound respectable at the same time. In this respect he is comparable only with the Clemens Krauss of the famous Fledermaus recording (also reissued by Eloquence, ELQ4827379).

In 1958 Paulik and the Volksoper had recorded an album of excerpts from Emmerich Kálmáns best-known hit, Gräfin  Maritza. This was done under studio conditions at the citys Sofiensaal, but thoroughly run in after performances of a new production at the Volksoper. Pauliks presence on the podium was a guarantor of authenticity: he had led the premiere back in 1926 at the Theater an der Wien. Marcel Prawy, who was close to Kálmán during the composers last years, produced the recording for RCA (it first appeared on Decca in 1973).

In December 1970, Paulik and the Volksoper returned to the Sofiensaal, this time for Decca, to record a double-LP of Viennese operetta, which was duly released the following year as Vienna, Women and Song. The set amounts to a history of the genre, as historically valuable as it is effortlessly enjoyable, opening with a duet from Der Zigeunerbaron and closing with a standalone song by Willy Czernik. Between them feature hit numbers from perennial favourites such as Millöckers Der Bettelstudent, Suppés Boccaccio, gems of Lehár from Die lustige Witwe, Das Land des Lächelns, Paganini and several others, before bringing the operatta story up to date with Kálmán, Künneke and names now less familiar to us such as Rudolf Kattnig (Mädels vom Rhein) and Nico Dostal (Die ungarische Hochzeit). With the soprano Renate Holm and tenor Werner Krenn at hand, both stalwarts of the operetta scene in the city, authenticity was once again guaranteed.