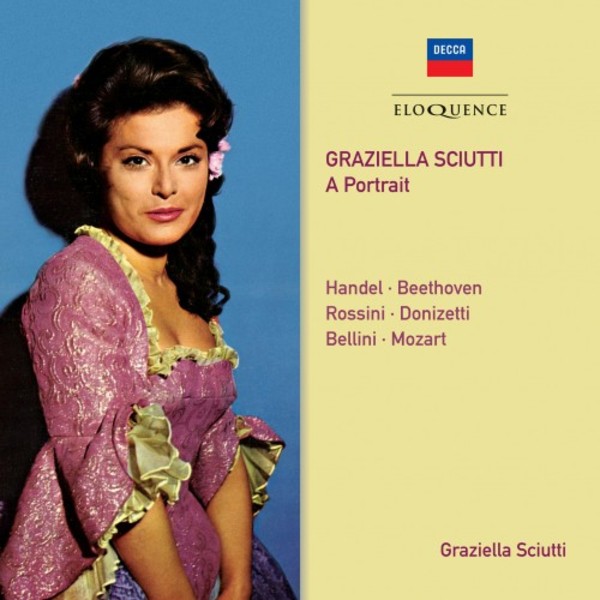 A cherishable Mozart soprano of the 1950s and 60s, celebrated with the complete reissue of a Decca recital album, newly remastered.

The quality that defined Graziella Sciutti as a singer was lightness - of voice, of bearing and presence on stage. Her vivacious intelligence was no less suited to the Rossini, Bellini and Donizetti roles which began what was remarkably her only operatic recital album, recorded by Decca in Vienna in 1961. There is Rosina (Il barbiere di Siviglia), which marked her debut at Glyndebourne in 1953 and Norina (Don Pasquale), which in Milan saw her unofficially crowned as the Queen of the Piccola Scala.

As Maria in La figlia del reggimento, she had made her Wexford Festival debut in 1957, at a time when Donizettis opera was virtually unknown; the critic of the Musical Times was entirely won over by both the personality and singing of Graziella Sciutti. Her voice and her use of it were a sheer delight. Her acting combined the tomboyishness of Marias regimental upbringing with a sprightly, vivacious femininity.
Nonetheless, it is for Mozart that Sciutti is most affectionately remembered: the director John Copley recalled her as the best Susanna I ever saw. Her winning and deliciously witty portrayals of both Susanna and Despina were sampled on side B of the Decca recital which concluded with Chi sà, chi sà qual sia, an insertion aria written by Mozart for a Figaro revival in Vienna, and the concert aria Nehmt meinen Dank.
Filling out this Eloquence reissue are Marzellines aria from the complete Fidelio conducted by Lorin Maazel, and three excerpts from the Alcina, led by Dame Joan Sutherland, in which Sciutti sang the role of the sorceresss sister, Morgana, with a complete sense of Handelian style as if by second nature.

Rosinas aria is sung with great affection ... it goes along beautifully with the conductor and it is shaded with pathos and mischief in the most engaging manner ... all in all, I like this appealing and idiomatic recital very much. - Gramophone, May 1961

There are sopranos around today with lusher voices and more dashing techniques than Miss Sciuttis, but there are none with a better sense of how to treat this sort of music ... the accompaniments by the Vienna Philharmonic under Quadri are in general quite above average, both in terms of tone and of musical care taken. - High Fidelity, January 1962

The Art of the Prima Ballerina