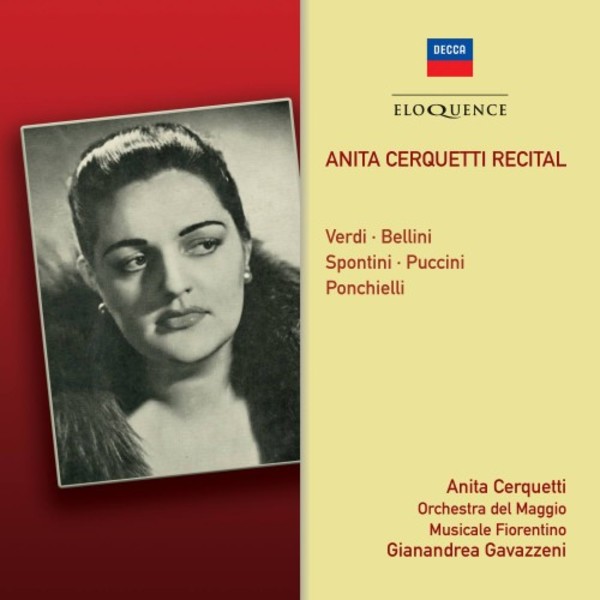 A famous Decca operatic recital, long unavailable, celebrating the thrilling voice and short-lived career of a soprano who set operatic stages alight in the late 1950s.

Anita Cerquetti made only two commercial recordings, both for Decca under the baton of Gianandrea Gavazzeni. In 1957 she sang the title role in a complete La Gioconda with Mario del Monaco and Giulietta Simionato also reissued by Eloquence. From the year before we also have this operatic recital in early stereo sound. There should have been many more recordings, but Cerquetti was forced to retire both from the stage and from singing altogether in 1961, aged only 30, with vocal problems putting paid to an all-too-meteoric career. A projected recording of Norma was begun, but as the story goes, Cerquetti was indisposed and the recording was abandoned.

An instantly recognisable fixture within Deccas Grandi Voci series during the 1990s, the recital then gained considerable second-hand value once deleted. Its reissue on Eloquence makes available once more the astonishing sound of Cerquetti in full flood. Recorded at the peak of her career, the recital mixes repertoire she would never sing on stage (Spontinis Agnes von Hohenstaufen - a premiere on record - as well as Verdis Ernani and Vespri siciliani) with signature roles such as Tosca, Aida and Abigaille in Nabucco. There is Casta diva, unavoidable and unforgettable, especially since the role of Norma propelled her to stardom in 1958 after she replaced an indisposed Callas at short notice in Rome while continuing to fulfil a contract to sing in Florence. The recital concludes with a pair of extracts from the complete Gioconda recording including the set-piece Suicidio aria.

A naturally warm, lyrical voice of considerable power and infinite tonal variety. Her mezza voce at the beginning of Casta diva recalls Rosa Ponselle, and her clear diction and keen sense of dramatic characterisation put her in the front rank of Italian sopranos. - EMG Monthly Letter, June 1957

Here you will find natural gifts and ability of no ordinary calibre. The new soprano has a volume of sound and a brilliancy of execution that command immediate notice; her ringing, challenging tones ride securely on the breath stream with never a waver ... This recital is a must for anyone interested in big, important voices. - High Fidelity, July 1957

Here is a soprano to be reckoned with. She has a strong dramatic voice, not quite so beautiful as Tebaldi or Milanov, but more beautiful than Callas ... Highly recommended. - Opera, July 1957

Her virtues remain startling. Above all, there is the power and splendour of a young, forwardly placed voice. She had ardour, brilliance, and a thrilling largeness of temperament; she was almost recklessly impetuous (the recitative to Abigailles aria). There is a lot of superb legato phrasing in this recital ... a hushed rapturousness in her Casta diva ... and vivid projection of the text. - High Fidelity, February 1973