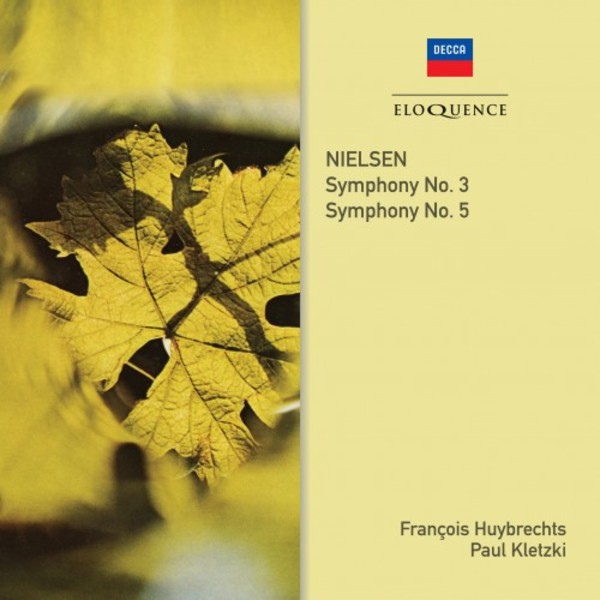 First releases on Decca CD for a pair of underrated Nielsen recordings. No less than Sibelius or Shostakovich, Nielsen became the custodian and the renovator of the classical symphonic tradition in the first half of the last century. Both the Third and Fifth symphonies make strenuous demands upon even the worlds great orchestras, but at the same time they reward the listener with eventful, continually compelling journeys through strife and towards the most satisfying resolutions.

The Sinfonia Espansiva does so through a sublime slow movement which winds to an idyllic close with a wordless vocalise from a pair of mezzo-soprano and baritone soloists, sung on this 1974 Decca recording by Felicity Palmer and Thomas Allen in a piece of luxury casting by Decca. The conductor was the young Belgian-born star of the baton, Francois Huybrechts, whose previous Decca recording of Janacek has also been reissued by Eloquence.

Huybrechts was among the first winners of the Dmitri Mitropoulos Conducting Competition, and during the 1970s he secured several US posts as well as prestigious engagements with European ensembles such as the LPO and LSO. His career fell away thereafter, but this pair of Decca recordings is the work of a powerfully individual podium presence. At the time of going into the studio with the Sinfonia Espansiva in 1974, the LSO was well versed in Nielsens idiom having recorded all six of the symphonies with Ole Schmidt the previous year.

By contrast, the name of Paul Kletzki has remained established in record catalogues and collections. This Polish-born conductor had taken charge of the Orchestre de la Suisse Romande in 1967 from its founder and long-time director Ernest Ansermet. Their Decca partnership began with Rachmaninov symphonies (also reissued by Eloquence) and continued to focus on twentiethcentury repertoire outside Ansermets repertoire with an album of Hindemith and Lutoslawski, followed by this thrilling and disciplined account of Nielsens Fifth from September 1969. It was their last recording together before his retirement from the post the following year and his death in 1973. Top-class Decca engineering brings the first movements life-and-death struggle into viscerally thrilling perspective.

At every stage the music is presented with eagerness and excitement, the muscular counterpoint has great intensity and you may well hear details you have not heard before... The playing is excellent, as indeed is the recording. Well worth hearing, and studying. - Musical Times, June 1971 (No.5)

A young Belgian conductor of great talent ... Huybrechts has obviously prepared the score with great thought and conscientiousness... He does not use the music as a vehicle for his own self-projection... The two soloists are both excellent. - Gramophone, March 1975 (No.3)