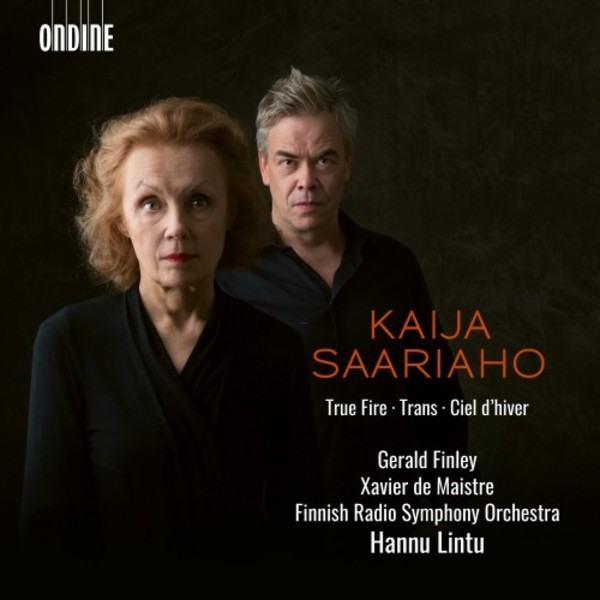 True Fire is a six-movement song cycle that was written to a commission from the Los Angeles Philharmonic, the NDR Symphony Orchestra, the BBC Symphony Orchestra and the Orchestre National de France, for baritone Gerald Finley with an original idea to explore the scope of the baritone voice. The texts conclusively determined what the vocal expression would be like and how the details in the musical material would shape up. The disparate texts chosen by Saariaho in fact have a common underlying theme: the status of humankind surrounded by nature, our observations of it and our belonging to it.

Saariahos orchestral triptych Orion (2002) is one of her most performed works. Orion as a celestial phenomenon is showcased in the middle movement, Winter Sky. In 2013, Saariaho rescored this movement for a smaller orchestra, and to distinguish it from the original she gave it a title in French with the same meaning, Ciel dhiver. It joins the series of works by Saariaho that are in one way or another inspired by things in sky and space.

Trans for harp and orchestra is the composers latest addition to a series of concertos. It was written to a joint commission from the Suntory Foundation for Arts, the Finnish Radio Symphony Orchestra, the Swedish Radio Symphony Orchestra, the Tonhalle Orchestra in Zurich, Radio France and the Hessen Radio Orchestra. The premiere was given by Xavier de Maistre in Tokyo in August 2016. Saariaho is fascinated by the harp because of the glissandos that are a characteristic feature of its idiom but also its resonance, broad range and the onset of the sound, the attack of finger on string. Playing with all these characteristics inspired her particularly in the cadenzas in the three movements of the concerto, which have a discreet orchestral accompaniment. In order to ensure that the harp remains audible, Saariaho scored the concerto for a relatively small orchestra. The title, Trans, has partly to do with relationship between the harp and the other instruments. As a prefix, it refers to a change or something that is temporary or perishable, and to the idea of transmitting messages from harp to orchestra or to transformations of the musical material as it is passed from one instrument to another.