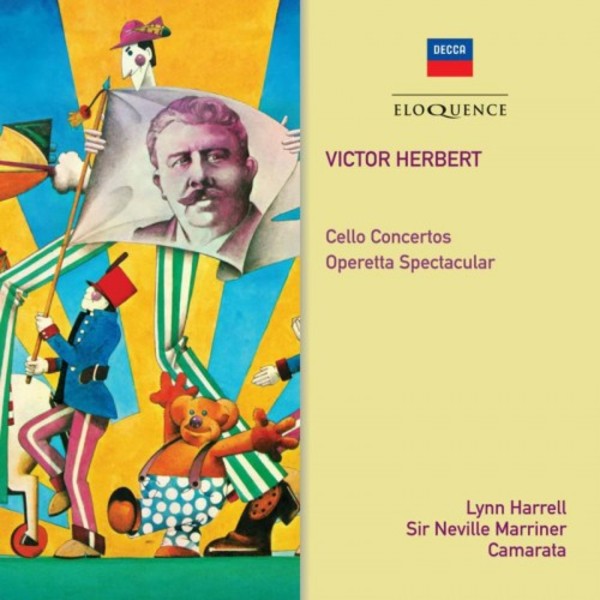 » A Kiss in the Dark
Pensee amoureuse
Punchinello, op.38
Sweethearts

» Art is calling for me
The Mountain Brook
The Only Girl

» When you're away
The Red Mill

» Every day is ladies' day
» Moonbeams
» The Streets of New York
Yesterthoughts, op.37

» A Kiss in the Dark
Pensee amoureuse
Punchinello, op.38
Sweethearts

» Art is calling for me
The Mountain Brook
The Only Girl

» When you're away
The Red Mill

» Every day is ladies' day
» Moonbeams
» The Streets of New York
Yesterthoughts, op.37

Favourite arias and romantic concertos by a pioneer of American operetta. Born in Dublin, Victor Herbert began his career as a cellist in Germany, playing for Eduard Strauss, for Brahms and Liszt, and emigrated to the US as principal cellist of the Metropolitan Opera. It was in that capacity that he composed the second of two concertos, written for himself to play, which give him a tenuous foothold on the classical repertoire.

They were first recorded as a pair by Lynn Harrell on this Decca album in 1986. Herbert was a virtuoso cellist, says Harrell, and it shows in the music; he wrote so beautifully for the cello. The fillers were character pieces as they are charming, originally for cello and piano, newly transcribed for the Academy of St. Martin in the Fields.

Established in New York, Herbert developed his orchestral and vocal writing and became an early recording artist. He even founded and directed the principal American organisation protecting musical copyright.

By then Herbert was a composer for Broadway, with hits such as Babes in Toyland (1894) and The Red Mill (1906) to his name. Naughty Marietta (1910) and Sweethearts (1913) followed in time. All these and more are featured on a 1975 Decca Phase 4 album recorded by Salvatore Tutti Camarata and his orchestra. For an encore, Kiri Te Kanawa sings the big number from Herberts 1911 show The Enchantress.