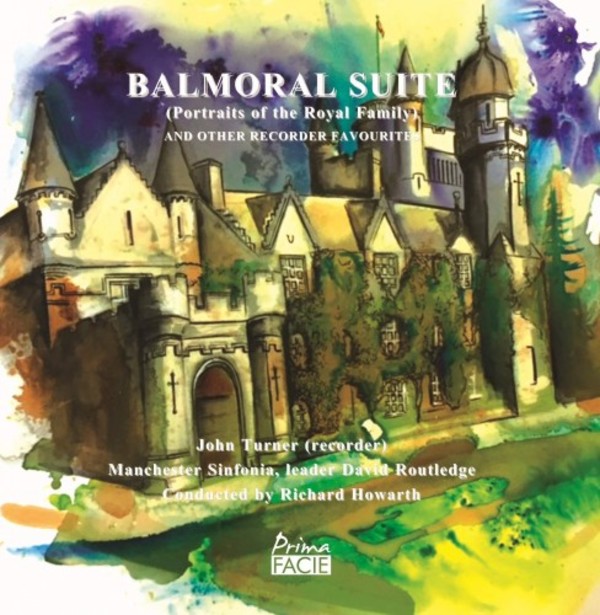 Balmoral Suite (Portraits of the Royal Family) and Other Recorder Favourites

I wrote this suite in 2017, as an affectionate tribute to a well-known family who habitually spend their summer holidays in the eponymous Scottish Highland abode. The work is a pastiche of Scottish folk music, with the occasional Modernist twist thrown in, to keep both listeners and players on their toes. Of the five movements, the first, Overture - The Family Gathers (descant, then sopranino) begins with a certain regal poise, after which ensues a medley of tunes expressing the wide range of ages and personalities brought together. Grandpa Hankers for the Past (descant), in recognition of the somewhat conservative taste of perhaps the most musical family member, is written in a mannered, rococo style, with a straightforward ABACA structure, giving the recorder plenty of scope for ornamentation in the reprises of the opening section. Enter Great-Grandpa (treble) gently acknowledges the growing frailty of the familys oldest member, depicting a difficult walking gait and a degree of understandable irascibility in the sections of dissonant harmony, especially where the strings play on the bridge.  Robin Stevens

John Turner is one of the leading recorder players of today. Born in Stockport, he was Senior Scholar in Law at Fitzwilliam College Cambridge before pursuing a legal career, acting for many distinguished musicians and musical organisations. These included numerous appearances and recordings with David Munrows Early Music Consort of London, the Academy of Ancient Music, the English Chamber Orchestra, the Academy of St. Martin-in-the-Fields and the English Baroque Soloists. He now devotes his time to playing, writing, reviewing, publishing, composing and generally energising. He has played as recorder soloist with the Hallé Orchestra, the Royal Liverpool Philharmonic Orchestra, the Manchester Camerata, the English Baroque Soloists, the English Chamber Orchestra, and many other leading orchestras and ensembles. Concertos and works with orchestra have been written for him by Gordon Crosse, Anthony Gilbert, Peter Hope, Kenneth Leighton, Elis Pehkonen, Alan Bullard, John Casken, and many other distinguished composers.