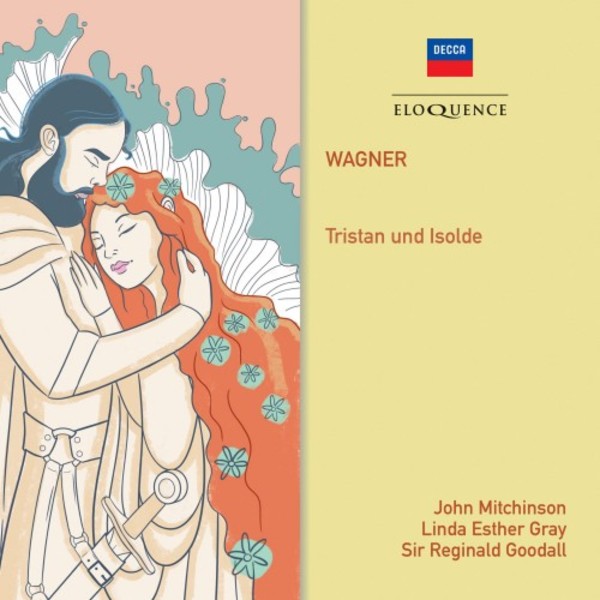 Deccas first digital studio recording of a Wagner opera, preserving the long-matured work of a legendary Wagnerian conductor. By the time this recording was made in the winter of 1980-81 over the course of two extended sets of sessions, the Welsh National Opera had given 18 performances of Tristan und Isolde with this cast, most of them under the watchful eye and inspirational baton of Sir Reginald Goodall.

The conductor had undertaken many preparatory rehearsals with individual members of the orchestra  the harp, even the bass clarinet  in order to achieve a properly Wagnerian synthesis of music and text.

The cast was English but exhaustively coached by Goodall in every nuance of the text. Particular praise, both of the recording and the associated performances, was reserved for the youthful and lustrous Isolde of Linda Esther Gray, in both her physical and vocal appearance.

The recording was undertaken by Decca with appropriate sensitivity to the renowned spaciousness of the Goodall style, using long takes  up to 40 minutes at a time  to preserve the unhurried but ineluctable flow of the conductors work at its finest. Goodall himself was pleased with the result: I felt, theres a statement, he remarked to Opera magazine in October 1981 after he had heard and approved the finished tapes, something finished; an experience. Goodall had been present at the EMI sessions in 1954 for the definitive Tristan of an earlier generation, conducted by Wilhelm Furtwängler, and Goodalls own achievement has been counted by many critics a worthy and comparable successor to that classic of the gramophone.

What will come as a surprise to many is the passion and excitement that the conductor brings to the score  it is an incandescent reading ... John Mitchinson sounds a true Heldentenor Tristan, very much like Ludwig Suthaus in the Furtwängler recording ... Gwynne Howells moving and finely sung King Mark would be an asset to any performance of Tristan.  Opera magazine, October 1981

This may not be the definitive Tristan; but it is difficult to imagine a more beautiful one ... The orchestra is instantly of international calibre ... The singing is every bit as good ... Linda Esther Gray is an outstanding Isolde ... Every note is performed with rare fidelity.  The Musical Times, April 1982

I believe this to be one of the most important Wagnerian recordings ever made, one that future generations will label historic ... this is a truly great performance, engineered with marvelously free and open sound and a very natural perspective ... the result is as close to Wagners total concept of musical drama as it may be possible to come.  Fanfare, November 1995