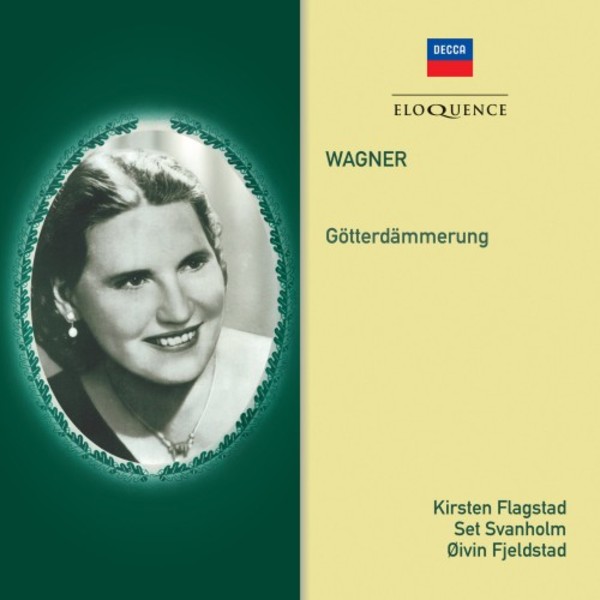 Kirsten Flagstads farewell to the role she made her own: a rarely reissued, newly remastered and extensively documented monument in the history of Wagner on record.

As the first commercial recording of Wagners Götterdämmerung this set would have lasting significance even without the presence of its undoubted star, the Norwegian soprano Kirsten Flagstad in her signature role of Brünnhilde. In fact Flagstad had retired from the operatic stage in 1953, just shy of her 58th birthday, with her voice still largely intact when she was persuaded to return to the heroine of the Ring one final time and in propitious circumstances: live performances of an act at a time, generously spaced by a few days at a time, working with a fellow-Norwegian conductor she knew well, and a partner in the role of Siegfried who had developed a musical understanding with her over the course of decades. On her death in December 1962, Set Svanholm paid tribute to the warm dark gold in her voice, the immense physical presence she brought to the stage and an expression in the performance whereby the greatness of the simplicity became overwhelming.

The concerts in January 1956 were recorded by Norwegian Radio; on becoming aware of them, Decca producer John Culshaw fully appreciated their significance and arranged for an additional recording session to cover almost all the sections of the score that had been omitted in the live performances.

Printed in the booklet of this Eloquence reissue there are further glowing personal tributes by Harold Rosenthal, former editor of Opera magazine, and by the conductor Richard Bonynge, for whom Flagstads Isolde, experienced live, was miraculous: Hers was undoubtedly the greatest Wagnerian voice that I have ever heard or that I am likely to hear again. The booklet also includes a contextual essay on the opera by Robert Boas and a full synopsis.

A magnificent performance ... Flagstad takes her place among the great Brünnhildes of all time ... But it must not be overlooked that this recording also preserves the performance of the best Siegfried of the same period, Set Svanholm, whose singing remains as accurate and intelligent as ever.  The Musical Times, October 1956

[Flagstads] voice remains amazingly strong and clear ... In the last two acts she sings with confidence and regal authority ... For such singing as this the set will always retain its value.  Gramophone, October 1956