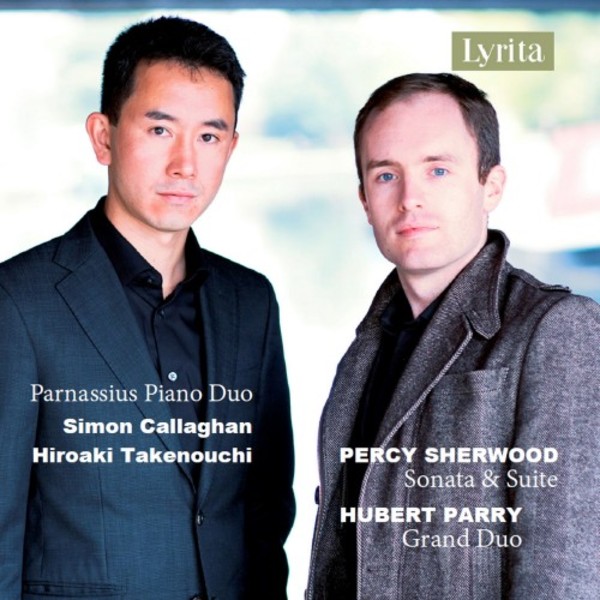 The two works by Sherwood presented on this disc were not published during the composers lifetime and are recorded here for the first time, using texts prepared and edited by Hiroaki Takenouchi from manuscripts held by the Bodleian Library.

The Suite presumably dates from 1901 or early 1902, shortly before its first known performance, which was given by the composer and Bertrand Roth on 20 April 1902 as part of Roths regular series of salon concerts at his home in Dresden. An inscription on the surviving manuscript names two dedicatees: Lucy Bambring and Edith Hempseed, a pianist active in the UK from around 1900 until the 1930s.

More ambitious than the Suite in terms of its scale and emotional range, the Sonata in C minor for two pianos was first performed by Sherwood and Hermann Scholtz under the auspices of the Dresden Tonkünstler-Verein on 27 April 1896. The works gestation is documented in the autograph manuscript held by the Bodleian Library, in which Sherwood noted the dates on which he completed the second, third and fourth movements over the course of a few weeks in April and May 1890.

First performed in 1877, the Grosses Duo appeared in print in the same year as part of Breitkopf und Härtels high-profile Klavier-Bibliothek (Pianists Library) series  the first edition of Parrys music to be published abroad. Perhaps recognising the new opportunities that international recognition might bring, Parry also relinquished his insurance job in 1877 in order to focus his efforts on developing a career as a composer, teacher and writer. Despite inhabiting a quite different sound-world from Parrys later choral works  such as Blest Pair of Sirens, with which he is now indelibly associated  the Duo therefore emerges as a pivotal work in his early career and musical development.

As students of the late Yonty Solomon at the Royal College of Music, Simon Callaghan and Hiroaki Takenouchi met in 2003 and since then have had a thriving duo partnership, giving concerts throughout the UK, Europe and Japan. During that time they have developed a wide-ranging and extensive repertoire and their engagements have included gala performances with principals from the English National Opera and a number of significant recordings.